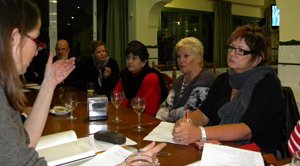 MOJACAR – The first meeting of the year for ACEM (Mojacar Business Association) was held on January 11 at Hostal Simon at the entrance to the pueblo. It was my first meeting as a committee member and to be honest I drove there with a certain air of trepidation. My previous experience with such meetings (mainly community meeting for urbanizations) has not been good. Everyone with their own agenda, people speaking over each other and a meeting that should take an hour dragging on for three or four. Silly me.

This is a professional body run expertly by President Karin Schroter also of Mojacar Estates. I should have known German efficiency would prevail. All ran like clockwork with a wide range of business owners of all nationalities in attendance. That is really the jewel in the crown of ACEM. It has brought everyone together.

ACEM has grown immensely since its inception as is now a member of the region’s main group with direct links to the Junta de Andalucia. This involves monthly meetings in for Karin but with size you get power and the ability to get things done. The 14 towns and villages that make up the larger association are a much greater force with town halls and national bodies alike.

Due to the rapid expansion someone was needed to do the ever increasing e-commerce of social networking, websites and general email and I am pleased to report that we have retained the services of an IT secretary fluent in five languages.

This is crucial  to make sure that information is sent out to everybody in the shortest possible time. Meetings are also being arranged with the hierarchy at Thomas Cook and First Choice to gauge what is required of Mojacar for these holiday companies to increase their presence here.

Pat Weston from Arriba Cafe Bar has been instrumental in this and should be applauded. Then it was decided that I should become officer in charge of all media, radio, press etc. So all information as it happens will be in the Euro Weekly News as well as on Spectrum 92.6FM.

The annual Dinner Dance is scheduled for March 26 most likely to be held at the Puntazo Hotel where the diary for 2011 will be revealed.

There will also be an announcement of a spectacular initiative for the area which should help Mojacar increase tourism numbers and provide a lasting memory for anyone visiting. All will become clear on the night.

Also on this evening will be the presentation of the Mojacar ‘Oscars’ (I suggested we should call them the ‘Walters’ after Mojacar’s supposed most famous son). These will be presented to companies and individuals who have done the most for the area in the past 12 months in a variety of fields.

Tickets for Mojacar’s most prestigious annual event will be on sale in February on a first come first served basis.

The Mojacar Tapas Trail, one of the most successful events of last year has been extended from 11 days to the whole month of July and a lot more bars and restaurants of all nationalities are set to take part. Last year 17 were on the trail but most people were unable to get round them all in time. This year we are hoping for 25 which should be a lot more manageable in a month.

The fashion show which proved so popular last year could also be resurrected to coincide with The Royal Wedding in April but this date is yet to be confirmed.

Leaving the best news until last, the cost of membership to ACEM is being reduced from €10 to only €6 per month for the next 12 months. A small price to pay to be a member of the association and the benefits associated with it from legal advice to a powerful voice on both local and regional levels.