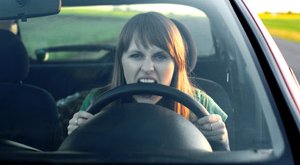 I AM on a mission. It may well be a one-woman mission at the moment, but gather round brothers and sisters and let’s see if we can’t get something going here.

I want to instigate a ‘Just Say Thank You’ campaign for drivers. I’m trying to get past the irritation of giving way to another motorist but not being acknowledged for it, and instead have decided to lead the way in manners.

So even when it is I who has been ‘patiently’ waiting (whilst muttering under my breath and drumming my knuckles on the dashboard) for an oncoming car to negotiate whatever obstacle is blocking our mutual path, it shall be me that will pop up my hand above the steering wheel briefly yet politely as the car passes. This is in the hope that I can instil a new habit around these parts of automatic ‘thankyous’.

Now we know that by and large the British are boringly polite, I can get at least two ‘pleases’, a ‘sorry’ and an ‘if you wouldn’t mind’ into the average sentence. And yes, I do hold the door open for other people. I think it’s the right thing to do, and my grandparents would rotate in their graves if I didn’t.

I’ve also brought up my daughter to say the ‘please, thank you, you’re welcome’ mantra: she doesn’t get what she wants without those magic words. There was a time that I wondered if these words were an automatic response, did that mean that they were not meant sincerely, did it lessen their importance?

But I don’t think so as politeness gets you such a long way, they’re like the grease in the conversation engine; they show respect to the other person. Don’t forget Aesop’s fable about the sun and the wind: who had a wager to see which one of them could disrobe a man; the wind blew fiercely and the man pulled his coat tighter around him, and the sun shone brightly and the man gladly took off his coat.

There are more advanced driving pleasantries which I’m not sure Mallorca is ready for yet, such as the one where you are being overtaken by a lorry on a motorway, and after they have got far enough ahead you give them a little ‘flash’ with your headlights and they know it’s safe to move into your lane. I once almost killed myself with that one driving at night when I changed my car headlights from ‘flood’ to ‘dim’ and the lorry overtaking me at the time took it as a signal to pull in front, whilst running me off the M1 into a ditch at the same time.

Perhaps together we can spread it around: just keep saying ‘Thank you’. I am hoping that in much the same way as Pavlov’s dog started to salivate whenever a bell rang that just the sight of another driver giving way will instigate an automatic Automobile Association salute.

Alternatively I might just become known locally as that nutty woman in the Kangoo who likes waving.