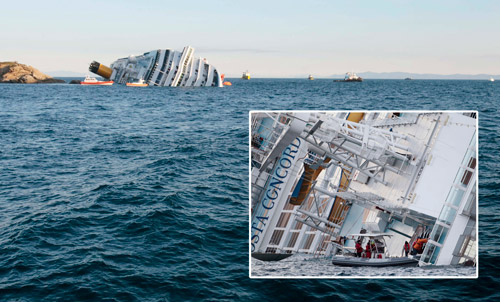 CRUISE SHIP DISASTER: Costa Concordia ran aground off the coast of Italy on Friday.

GUILLERMO GUAL, a 68-year-old from Mallorca, died in the Costa Concordia disaster, the Spanish embassy confirmed.

He was found wearing his life jacket, trapped in a cabin in the submerged part of the ship which ran aground off the Italian island of Giglio last Saturday night.

Gual was travelling with his niece and nephew Ana and Juan – who own a Can Pastilla bar – accompanied by their four children and two friends.

His wife, youngest son and daughter, together with a friend, managed to leave the ship in a lifeboat, Juan told reporters last Sunday as the family awaited news of Tio Guillermo.

Nevertheless, when Ana saw that the rest of the Mallorquin party were still aboard the sinking Costa Concordia she had to be prevented from leaving the lifeboat.

Even though the remaining males should have been able to look after themselves, Ana knew that Tio Guillermo, who had learning difficulties, was not.

Hours later, when she rang Juan to tell him she and the children were safe, he and the others decided that amidst the confusion and bad organisation, their only option was to jump from the heavily listing ship.

Once in the water they realised that Tio Guillermo was not with them, but had no way of knowing whether he was elsewhere in the water or had changed his mind at the last moment.

Throughout Sunday they hoped for news of him but by 9pm they knew the worst and learnt that their uncle’s body had been found by rescue teams.

The captain Francesco Schettino, who left the Costa Concordia soon after it ran aground, was arrested shortly afterwards with the first officer, accused of manslaughter and abandoning ship. Schettino had made an unapproved, authorised manoeuvre prior to the tragedy, said the cruise company.

The Costa Concordia was only 150 metres from shore when it ran aground and, according to some accounts, deliberately approached Giglio for islanders and passengers to greet each other.

At the time of going to press 11 had been confirmed dead and 24 missing.