Mojacar car park ‘will not affect’ Moors and Christians celebrations 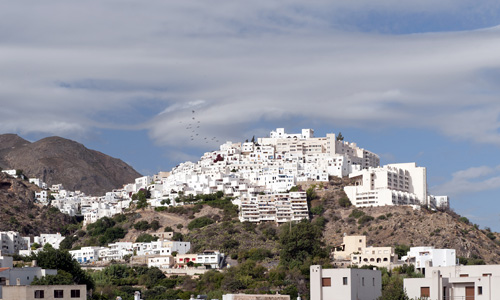 WORKS at the underground car park in Mojacar Pueblo will not affect Junes Moors and Christians celebrations, the mayor said.

The car park is due to be completed by the summer and the 37 parking spaces will be sold exclusively to residents.

The project has divided the town, attracting criticism from many local residents, and business owners.

The town hall is building the car park to encourage current senior residents to stay, and make Mojacar an attractive option for possible new and younger residents. Bulldozers and drilling can be heard from the main square (Plaza Nueva) and some businesses can now only be reached on foot.

The Conservative PP Mayor, Rosa Maria Cano acknowledges that the building work is a nuisance for residents and business owners, but maintains that it will be well worth it.

Cano also said that the €750,000 for building the car park was a government grant from a programme for improving run down areas. The grant was specifically for this project, she said, and could not be used for anything else.

Local resident Tim Boyd who has lived in Mojacar for 25 years and used to own a shop near the construction site, said that business is very bad anyway but now it’s even worse because of the construction work.

One British resident, who asked not to be named, said he was sure that most of the parking spaces would be given, or sold cheaply to local politicians and their families.

The mayor denies this. Meanwhile, groups and individuals concerned about the environment and character of Mojacar would prefer to see less traffic in the town centre.

“To locate a parking space just in the centre of a town like Mojacar, doesn’t seem the most attractive solution, as cars could disturb its character,” says Green Party (EQUO) member Annete Hauer (42).

The German environmental expert who has been living in the area since 2000 states that Mojacar centre should be virtually car-free, with the car park located at the edge of the town, and only very few cars being allowed to enter.

“The car park is actually part of a larger plan to create more pedestrian zones in the town centre,” said a spokesperson for the mayor. The road near the church and chemist used to be open to all vehicles but only parking space owners will be allowed to drive up and down it in the future.

The Moors and Christians procession in June won’t have to be re-routed as first feared by residents. Even if the underground car park is still being built, the ground above will be finished in time, according to Cano.

She adds that there will be a plaza (square) on top of the car park which some people are concerned won’t be in keeping with the town’s traditional architecture.

Whether or not individual people like the new square’s style, says a town hall representative, is a subjective matter, “but it will be a big improvement on the ugly, empty piece of land that used to be in its place”.