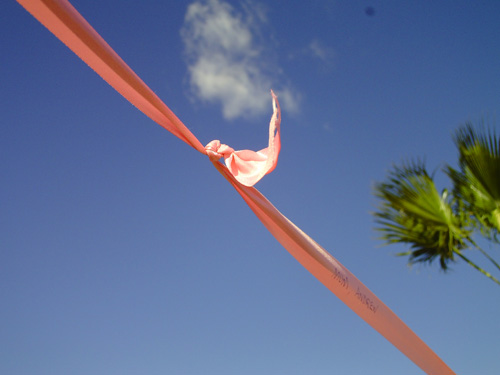 Names of loved ones were written on the ribbons that were tied together and stretched down the promenade.

CROWDS came down to Mojacar Playa in their winter woollies on Saturday February 4, World Cancer Day, for the Spanish Cancer Association (AECC) Ribbon for Life fundraiser.

The event was a huge success, according to organiser Bronia Montero, who was very pleased to see Spanish and expatriates working together both before and during the event.

One metre long pink ribbons were sold leading up to the event and also on the day, for €1.

People wrote their names on them (or the name of a loved one) and handed them over to be tied together by volunteers.

One hour into the event, the ribbons had stretched from the Hotel Indalo at the far end of the promenade, to the stage (opposite Ottocento Restaurant) and back to the hotel.

By the end of the day, 3,500 metres of ribbon had been tied together. The actual number of ribbons sold was more than that though, as not everyone who bought a ribbon attended.

This was the first time that AECC Mojacar has held an event on World Cancer Day. The committee organises four events a year, with the next event planned for mid-July.

“Protejete y vive,” (protect yourself and live) will be held in the summer because it’s a skin cancer fund-raiser. There will be sporting events, followed by a dinner and trophy presentations.

In October the AECC will hold a walk for Breast Cancer Day. Stallholders, who donated €10 each, set up along the seafront and sold handicrafts, clothes, sweets, cakes and bric-a-brac. There was a charity bar, plates of paella for €1, and singing and dancing.

Money is still being collected and counted, and is expected to total more than €5000, “I’m very pleased, and I think there’d have been even more people if it hadn’t been for the terrible wind,” said the organiser who thanked everyone involved for all their hard-work and enthusiasm.

For information about forthcoming events, and to see photos of The Ribbon for Life, become a friend on Facebook by searching for AECC Mojacar. Contact: Bronia Montero 616 424 555 [email protected]