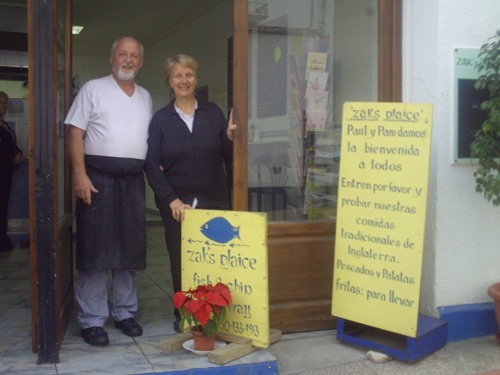 NO SIGN: Paul and Pam are worried that customers can’t find their fish and chip shop in Garrucha.

A BRITISH couple from Birmingham who own a fish and chip shop in Garrucha, are concerned that new customers can’t find their shop.

They have been ordered to remove the sign directing customers from the promenade to their chip shop on the Main Street.

Garrucha town hall sent written warnings to business owners that unauthorised signs and pavement boards must be taken down.

Paul Turton who has owned Zak’s Fish and Chips for four years said he feels that there is a “them and us” attitude towards non-Spanish business owners in Garrucha.

A Garrucha council official has denied foreign business owners are getting a raw deal compared to their Spanish counterparts.

Turton told the EWN that as soon as he removed his sign from the edge of the pavement, another (Spanish-owned) restaurant put two signs up in its place.

An employee at the Andalucia Restaurant said that the restaurant had also received a written warning but that in reality the town hall won’t do anything about it until the high season begins.

Paul and his wife Pam said they would be willing to pay to put a sign up on the seafront but that they don’t think it is possible.

The town planning councillor at Garrucha Town Hall, Bernardo Simon said that signs must be above shop doorways or in between tables on terraces so as not to obstruct the public right of way.

He said that the existing advertising signposts in Garrucha were approved years ago and therefore won’t be removed for the time being but that it’s unlikely permission be given for new signs for ‘aesthetic’ reasons.

He added that ideally the seafront road should be reduced to one lane, made one-way, a cycle track should be added and the pavement widened.

Meanwhile, the German owner of a fast-food restaurant on Garrucha’s seafront said that there isn’t a problem with discrimination but that some people use it as an excuse or tool to try and get what they want.

He said he has been in contact with the planning councillor at the town hall to try and get permission for outside seating area and knows that it is hard to get.

Another local business, La Cantina de Floor has been turned down permission for a cafe terrace four times.

Owners Venezuelan Hugo Sanchez, and Floor Rhebergen from Holland said they have even offered to pay to move the bus-stop and don’t understand why they can’t get permission.

Sanchez said that he feels that Spanish business owners may get preferential treatment over “foreigners” at the town hall.

The Planning Councillor Bernardo Simon dismissed there foreigners were receiving unfair treatment stressing that all business owners are treated equally regardless of nationality.

He said that La Cantina de Floor cannot have a terrace on the opposite side of the road because it’s the busiest stretch of pavement in the summer due to the open-air market, and that moving the bus stop is not an option.

Sanchez and Rhebergen plan to take the matter to the European court in Brussels.