Out and about on St Patrick’s Day 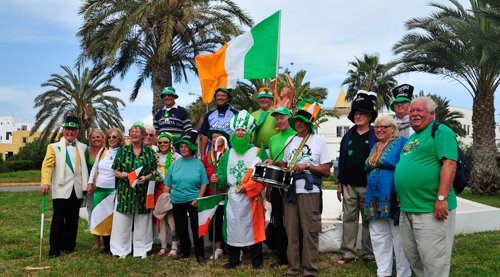 MARCH 17 is widely recognised as an Irish holiday, a day of celebration for the country’s patron saint, yet more and more people the world over are beginning to get in on the merriment.

Gradually over the years the day has come to be a celebration of Irish culture in general. St Patrick was actually born in Roman Britain before being kidnapped at age 16 as a slave and taken to Ireland.

The boy escaped but later returned to the Emerald Isle, and it is said, was the first to bring Christianity to the Irish. After his death in particular, mythological stories attached themselves to the figure of St Patrick.

Along with the well known legend that he drove all of the snakes out of Ireland, is the Irish folklore that St Patrick explained the Holy Trinity to the people of Ireland by using the three-leaved Irish Clover, known and recognised today as the Shamrock.

This particular myth, and its association with the green coloured clover, is also responsible for the importance of the colour green to the day’s celebrations.

However, the very first St Patrick’s Day parade did not actually take place in Ireland but in the United States in 1782.

Irish soldiers serving in the English military marched through New York City and found themselves through hearing their native music reconnected with their Irish roots and with fellow Irish soldiers.

Irish families traditionally celebrate St Patrick’s Day by going to church in the morning and celebrating in the afternoon, as after all, the holiday is originally a religious one.

Considering the rancor of today’s celebrations on March 17, it was not until the 1970s that public houses (pubs) were allowed to re-open their doors on St Patrick’s Day.

Celebrations include drinking, dancing and feasting on the traditional Irish meal of Irish bacon and cabbage.

Lent restrictions on meat are even waived for the day so everyone can enjoy the Feast of St Patrick.

By Beth Wright
Pictures by Richard Shanley and Tony Unwin