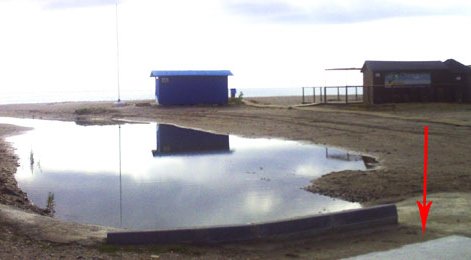 DRAINED: Underground pipes connect to a drain on Vera beach next to the Chringuito Sol y Luna.

AN IRISH man from County Wicklow, who lives for six months a year in Vera Playa, would like to see a nature reserve created, near the apartment he has owned in the naturist area since 2004.

When it rains, the area by the beach restaurant, Chiringuito Naturista, floods into the restaurant and up the street.

Paul Moynihan proposes that water be channelled into a natural pool to prevent flooding and attract birds. Sixty five year old Moynihan, and chiringuito owner, Maria told the EWN that the problem has gone on long enough.

Maria said that when it rained recently she had called the Vera town hall, and a bulldozer had quickly come to remove the mud because the water level was rising dangerously.

However, she said that she regularly hears her customers complaining because nobody takes responsibility for sorting out the long-term problem.

She said that the beach authority (Costas), say it’s not their job and that the Vera town hall say that it’s Costas responsibility.

Maria del Carmen Las Marias, another Spanish woman who lives in a housing complex near the chiringuito, said that the pipes may help seawater run off, but that they bring water from across the road.

She said that she can’t even get to the wheelie bin to throw her rubbish once it has rained.

Moynihan said that the problem began about five years ago, when a system of underground pipes were installed to bring rainwater down the hill from the housing complex on the opposite side of the main road and out through a drain onto the beach.

He said that the flooding is not only an eye-sore, but it also makes the ground dangerously boggy and slippy. Muddy pools of dirty water make it difficult for neighbours and tourists to walk and drive around.

“What I’m proposing is the diversion of the rain water from the new buildings off Avenida el Salar to the natural pool bordered by the Avenida and the Garrucha-Villaricos road, opposite the Consum supermarket.”

Moynihan said that he has seen bird reserves in Ireland with raised walkways, and that something similar could be constructed in Vera Playa.

He said that “twitchers” and photographers already go to the Salar pool to watch herons and other wildlife. On March 23 and 26, Moynihan and his wife, Barbara saw three flamingos there.

He said that he would love to encourage the development of a bird sanctuary, which could become a tourist attraction and create jobs, but that he can’t speak any Spanish.

Maria said that she understands why her chiringuito customers complain about maintenance in the naturist area in general.

She said that it’s not just the water problem, but that neighbours and customers see the area as being generally abandoned.

She said that the other side of the main road (not a naturist zone), is well-cared for, but that near her chiringuito there aren’t even any recycling bins and the public gardens are a mess.

She said that the differences between maintenance in the naturist area and the nearby “textile” areas are obvious, and that some neighbours feel this stems from town hall prejudices.

Vera town hall said that work is in progress to clean up the Vera Playa coastal area and stop floods.

Town hall Spokesperson Jose Fernandez said that the local council had met with the “Costas,” director several times to explain the importance of improving Vera’s beaches.

It is unknown when or how the flooding problem will be resolved.