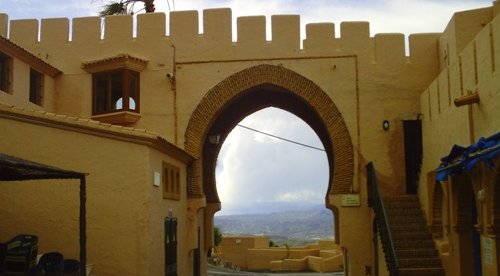 REMEMBERED: Cabrera's arch is named after the village's founder.

CORTIJO CABRERA will hold its annual fiesta with Moors and Christians processions on Saturday June 8.

Residents John Bailey and Mo Dalton say that Cabrera is on good terms with their town hall in Turre.

However it has not yet acquired official village status.

It operates like an “urbanizacion,” with residents paying community fees into the “Cabrera Project,” fund which is administered by a residents’ committee.

There are certain conditions that Cabrera must meet before becoming recognised as a Turre village, according to village treasurer Mo Dalton. Holding an annual fiesta is one such condition.

They were changed to June 9 because the 23 is also San Juan; a big fiesta day in Garrucha and other nearby coastal towns. The archway in the village’s centre bears Grosscurth’s name.

From 1987 to 1989 he converted a ruined church into a restaurant, which is now one of the main community meeting places; Los Pastores.

The church was a mosque in the thirteenth century but became a Catholic church in 1492. After Grossworth passed away in 1993, Turre town hall gave Cabrera a commemorative plaque that now hangs on the wall in Los Pastores.

This community of about 200 homes, in the Cabrera Mountains, boasts more than ten different nationalities.

Dalton said that approximately half of the homes are inhabited all year round, and half by semi-permanent residents.

John Bailey from Essex, has lived in Cabrera, “on and off” for more than 20 years. His wife is Spanish. He said that he especially likes the village’s community spirit, and its quiet, peaceful way of life.

He added that the community is working hard to encourage “Spanishness,” because Cabrera doesn’t wish to be seen as an “English ghetto.”

The residents’ committee treasurer, Jose Jerez is Spanish, and other Spanish people live in Cabrera too.

Matanza festivals were very important in rural Spain because pigs were slaughtered, and meat products made and preserved, to see families through winter.

Bailey said that the tradition is becoming important again in many parts of Spain because of the recession.

They didn’t kill any pigs in Cabrera last year, but Spanish people demonstrated the traditional way of making sausages and black pudding.

A dome-shaped oven was built for baking bread in the old-fashioned way.

More than 150 people attended the event which will likely be repeated this year.

There are no shops in Cabrera but there is a Post Office.

Dalton said even though it’s a small village, there are plenty of services for tourists and residents.

Guest houses, restaurants, tennis courts, a library, bridge and euchre games, a sports club with a pool being built, petanque, horse-riding and yoga are a few of the things on offer. Being up in the mountains, they sometimes get snow.

Los Pastores has a generator which Dalton said was put to good use last year during exceptionally heavy rains and power cuts. The restaurant made a huge pot of soup for the villagers.