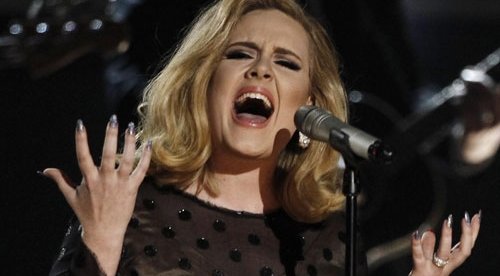 ADELE and the Foo Fighters have dominated the 54th Grammy Awards.

Adele, who took the stage to perform ‘Rolling in the Deep’, picked up six awards; winning every award for which she had been nominated.

Host LL Cool J opened the ceremony with a prayer for Whitney Houston, who passed away on Saturday February 11th, and Jennifer Hudson also performed an emotional rendition of ‘I Will Always Love You’ in tribute to the late diva.

Nicki Minaj took the stage for a bizarre performance in which she was ‘exorcised’.

The overly eccentric singer arrived at the awards show clothed in red robes with a man dressed as a bishop on her arm. The Beach Boys also reunited for a special performance with Maroon 5 and Foster the People, while Rihanna and Coldplay joined forces to perform ‘Princess of China’ live, for the first time ever.

Ed Sheeran – Drunk: is the next single to be released from Ed Sheeran’s debut studio album +. ‘I wanna be drunk when I wake up,’ Ed Sheeran croons over crisp acoustics with a smooth vocal that sounds very much like his previous hit ‘Lego House’.

Lyrically, the track describes Ed losing his girlfriend, and as the official video demonstrates, his cat does its best to try and cheer him up by taking him to bars and getting him drunk.

Drunk is currently available for digital download, and will be officially released this week.

Steps are reportedly no longer guaranteed to record an album of new material after Sony reneged on its initial deal. The ‘5, 6, 7, 8’ group reformed last year with the intention of embarking upon a UK arena tour and releasing a fourth studio LP, however, Sony is believed to have told the five-piece that they do not want to fund another record, forcing them to shop around for a new label.

A source revealed to the UK’s Sunday Mirror: “They’ve instructed their management to widen their ideas and talk to other labels. Universal is top of their list. They want a new album off the ground. It’s a case of finding the right label to take the risk.”

Whitney, mother to Bobbi Kristina, 18, had been staying at the hotel ahead of attending Clive Davis’s pre-Grammy gala, where she had been tipped to perform.

He told reporters that there are “no signs of criminal intent”, adding that an investigation into the cause of death has begun.

Reports have said that an autopsy has taken place. However, TMZ sources add that results could be “deferred pending a toxicology report”.

A “devastated” Clive Davis proceeded to hold his annual bash, which he dedicated to his friend, telling guests: “She loved music and she loved this night that celebrated music.”

THE VIBE BY MELISSA JAYNE