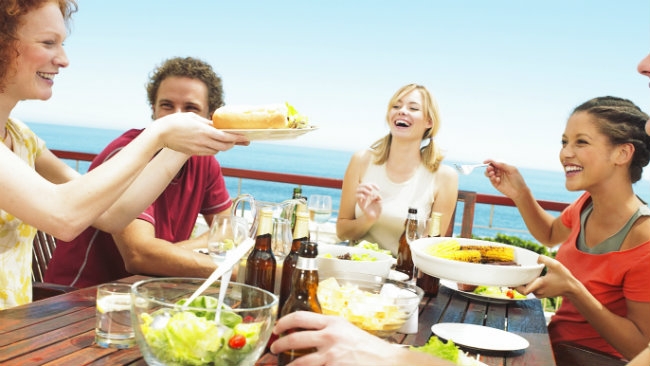 LIKE a schoolgirl with a bag full of candy, owning a house in Spain in the summer season begs the question – is it me or the goods? Popularity soars to dizzy heights as friends, family and acquaintances pop up with higher frequency than the most fervent Jack-in-the-box.

Normally I am all for the notion the more the merrier, but while rearranging cushions to construct makeshift beds and placing guests in the damp cellar for lack of space, I have started to wonder if there should be a limit to one’s hospitality.
Sure, it is wonderful to spend quality time with friends, but when most of your days are spent trawling the supermarkets or chopping onions, you might as well go the whole hog and open the hotel you are already, in effect, running.
Sounds familiar? I should have known better – other expats had warned me of the impending risk of summer invasion: guests, they assured me, like fish start to smell after three days.  But the guest list just sort of crept up on me and it is ever so hard to say ‘no’ – especially since the weather is so atrocious back in Northern Europe. More often than not, the phrase ‘do come and see us’ pops out before it can be stopped.

So, how do you know when you have demasiados invitados? A few clues spring to mind: You begin to answer requests with ‘Yes, ma’am’; you miss most of the mealtimes for the runathon between dinner table and kitchen; the washing machine is whimpering due to overuse; you max out your credit cards at Carrefour rather than Chanel; and picking up discarded ice cream wrappers from the garden is your main form of exercise.

Seasoned expats have perfected the art of guests, and in the spirit of ‘once bitten, twice shy’, I am weighing up their collated advice for the summer season 2013…

1. Switch to a smaller house without guest rooms – though some people seem quite happy to camp on the sofa.

2.  Rent the house out for the summer and take off for new adventures, paying the way with your rental income. This option runs the dual risk of landing in trouble with tax authorities and / or returning home to find your abode more resembling a ruin than a residence.

3. Take a staycation, but lock the doors, close the curtains and pretend to be away – an added touch would be to leave the mail to pile up so as not to alert passers-by to the ruse. You may have to stockpile food, but just think of how much rest you will get and how your skin will thank you for the reprieve from the punishing sun.

There is always the possibility of simply saying no, but then – after all – it really is rather nice to see those friends again, sharing memories and creating new ones at sunset over a chilled copa de cava. Ultimately it boils down to a question of staff – if you can afford to pay people to do your cooking and cleaning, guests are most welcome in the holiday hotel.  I will be working on this one for next season’s onslaught.

Until then, I will probably be seeing you in the frozen food aisle at the supermarket.