Interpol hunt as yacht engineer disappears along with €30,000 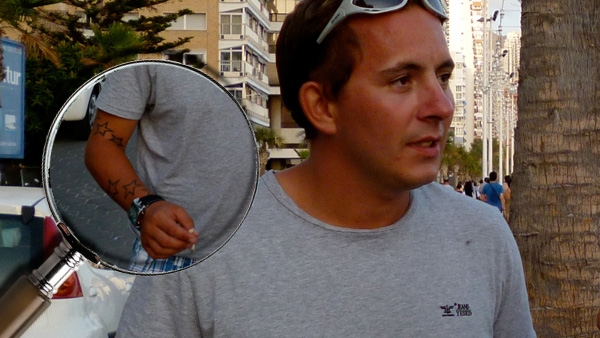 Paul Scott, picture on the night he went missing, along with €30,000. INSET: His star tattoo

A YACHT engineer has disappeared, along with €30,000 in cash.

The money is missing from the yacht on which Briton Paul Scott had been a crew member for six months.

Police throughout Spain and Interpol have now been alerted to be on the look-out for Scott from Manchester, who disappeared on Sunday when the yacht was moored in Denia Port north of Alicante on the Costa Blanca.

Interpol believe he is still in Spain, or the EU, as no sightings have been reported at passport controls.

In addition to the €30,000 cash, the personal documents of three other crew members including two British and an Australian passport, marriage and birth certificates, the licence of the captain and legal documents for the yacht have also missing.

Twenty-eight-year-old Scott was one of four crew aboard the British-flagged yacht hired privately by passengers last week to take them from Ibiza to Moraira, near Denia.

After dropping off the passengers, the yacht docked overnight in Denia before a planned return trip to Ibiza to pick up other clients.

All the crew went out in Benidorm, with Scott returning to the boat around 10pm with the chef, Ruth Cherrett, who opened the safe to get money to pay for their taxi.

When yacht stewardess Sian Cameron, who had earlier returned to the yacht, and Ruth went to bed, they said Scott told them he was going on deck.

A little later the yacht captain David Cherrett, who is Ruth’s husband, returned. When he went to the safe the cash was found to be missing.

“Paul had been drinking a lot that night, so we are not sure if it was premeditated or if he found the key and it was a spur of the moment thing,” said Ruth, who is from Australia but who has lived in Mallorca for 10 years with her husband.

“We had lived and worked with him for sixth months and he is a really nice guy. We are devastated.”

The €30,000 was made up of crew tips, money from previous clients, a deposit from future passengers plus petty cash.

Theft of the passports and other documents meant Russian clients who they were booked to pick up in Ibiza had to book another another yacht.

“Because of the incident our boss has lost €60,000 worth of business. He is not happy,” said Ruth, who says 15 items of jewellery given to her by her late father and family members are also missing.

“They are not particularly valuable, but have great sentimental value to me.”

His passport photo has been circulated with taxi companies.

“We think he may have gone to Benidorm as he doesn’t speak Spanish,” said Ruth.

“He has a distinctive tattoo of 11 stars from his wrist to shoulder, standing for Manchester United Premiership wins.”