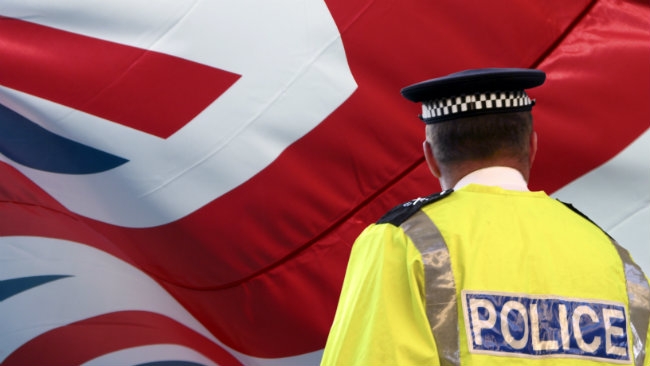 BRITISH BOBBY: Police force that was once the envy of the world

I wish people would stop having a go at me for knocking the UK. I NEVER have a go at the auld country itself. The only gripes and groans I have is what some irresponsible and often downright traitorous individuals are turning it into! The beautiful country of my birth, which prided itself on its freedom of speech, patriotism, low crime rate, wonderful NHS care and a police force that was the envy of the world, has, since the Labour government decided to buy itself votes by inviting in all and sundry, been reduced to a land of rampant crime, deteriorating health services, no go areas, feral gangs of hooded yobs, foreign spongers and a warped sense of justice – the last of which was glaringly spotlighted this week by businessman Mr. Stuart Pettman. Apparently his 12 year old son Oliver had been surrounded by a gang of seven black youths in a local park. After terrorizing the lad and stealing his biscuits, they accused him of being a racist. When he denied the accusation, they shot him three times with an air rifle and made him kiss their feet. The next day riding in his Dads car Oliver recognized one of his attackers. Mr. Pettman approached the young man and insisted he accompany him to the local police station. The youth was then questioned and subsequently released. The next day Mr. Pettman was contacted and asked to come down to the station. When he arrived he was immediately arrested, had fingerprints an d DNA taken and was put in a cell for SEVEN hours. Apparently the youth had (falsely) accused him of assaulting him with a hacksaw blade! Finally released without charge, Mr. Pettman said he was now taking steps to sell his eight hundred thousand pound home and move to Singapore, where he was opening new offices. Both his daughter and son were now too traumatized to even go out and this event had simply been the last straw. None of the gang has been arrested and in a statement the police declared they (the police) were simply ‘following procedures’. Can you blame this law abiding gentleman for deciding to finally throw in the towel? Of course you can’t. The whole episode is a disgrace and perfectly described by Mr. Pettman as a product of a ‘broken Britain’. I dunno, sometimes I really do despair of it all.
Finally a funny.

A friend was telling me that some years ago they were staying in a Magaluf hotel on their first visit to Mallorca. The wife noticed a sign outside the restaurant which advised guests to ‘dress for dinner’. That evening suitably attired in long evening gown, abundant jewelry and boa she swept into the dining area only to discover the other guests in shorts t shirts and flip flops. The hotel had merely been requesting the residents to wear clothes! Lovely.
Keep the faith
Love Leapy  [email protected]