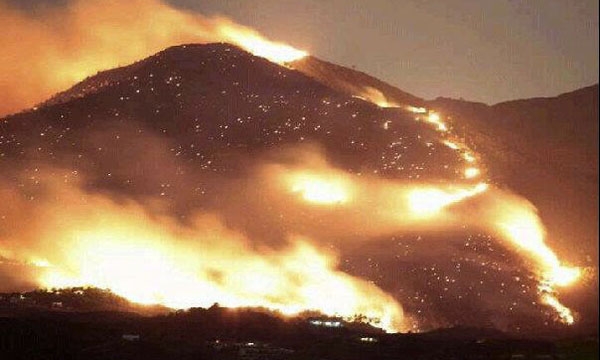 The blaze continued to rage throughout the day in Ojen and Monda although was reportedly stabilized around 5pm, according to fire unit Infoca. More than 800 people and 31 planes and helicopters worked throughout the day trying to extinguish the flames.

It is estimated that more than 5,000 hectares – more than 10,000 football fields – has burnt in the Malaga Province in the past 48-hours. This is nearly half of the total amount of land burnt this summer in forest fires in Spain.

The body of the man found burnt in Las Blanquillas in La Mairena in the Ojen municipality was not that of a 78-year-old Brit as informed by fire unit Infoca, but that of a 54-year-old German man with the initials C.R. The entire area had reportedly been told by police to evacuate. However it is believed he returned with his wife, although her body has not yet been found.

At this point in time official reports have confirmed that one person has died and five injured – two seriously – in the blaze.

A Facebook page – click here – has been set up were offers of help are flooding in. Anyone wishing to help those who have lost their homes can bring clothing, food, water, cleaning materials, among other items to Iceland in Fuengirola and Puerto Banus, and the congress hall and Serrano Lima Pavillion in Marbella

Volunteers worked until 5am Friday morning bundling the dogs at Kim’s animal shelter in La Atalaya to other centres or simply fostering themselves. The fires swept into the bottom of the rescue centre land housing the cattery and volunteers had to think quickly and released them onto the land. They are now reportedly slowely returning. No dogs died, but did suffer – along with many volunteers – some smoke inhalation. Damage is limited to the cattery and some outbuilding but the majority of the kennels are intact. If anyone would like to donate email [email protected] or see www.kimsanimalrescue.com.

The mayors of the six municipalities affected by the fire will be meeting with the Andalucia Regional Government and other institutions on Tuesday in regards to determine the damage caused by the blaze.

UPDATE – Marbella residents affected by the blaze were told they could return to their homes around 5.45pm after the fire was confirmed to be under control in this area, according to the town hall.

As of 6.30pm the majority of focal points have been stabalized, excapt Ojen and Monda, which should be under control in the next two hours, before night falls. Up until this time airsupport will continue to work afterwich ground fire-fighters will ensure that the fire does not restart.

UPDATE – The body of the man found burnt in La Mairena has been confirmed to be of a 78-year-old Brit.

Meanwhile, the fire is reportedly still not under control and advancing towards the Sierra Blanca and El Juanar parks as well as Villares, in Ojen.

There are also concerns that the main focus points in Elviria, Rosario and Lomas del Pozuelo will revive.

A total of six municipalities in the Malaga Province have been affected by the blaze including Coin, Alhaurin, Mijas, Marbella, Ojen and Monda.

UPDATE – It has been confirmed that the couple from Urbanization El Rosario injured in the blaze are German, aged 59 and 60. They are in critical condition at Malaga’s Carlos Haya’s burn unitl, although the man has since been transferred to Hospital Virgin del Rosario in Seville around 3pm.

Meanwhile, two hotels in the Juanar park in Ojen have been evacuated after the blaze passed the road that connects this municipality with Marbella.

UPDATE – Reports have come in that the fire may have been caused “intentionally”, according to the president of the Andalucian Regional Government Jose Antonio Griñan.

They hope to be able to stabilize the blaze by this afternoon. It is currently in the area by El Juanar and Los llanos de Cuzlas. Latest data says that up to 1,500 hectares of land has been burnt.

UPDATE – The fire has reportedly reactivated in Barranco Blanco, after it was believed to have been extinguished earlier this morning (Friday August 31).
The blaze was reportedly getting close to the A-3303 between Coin and Mijas around 12.30pm.

Barranco Blanco residents have once again been evacuated. Traffic has been cut on two roads that join Ojen with Marbella, the A355 and the A-7103.

AROUND 5,000 people were evacuated, of which 300 were British expats, after a fire swept through six municipalities in the Malaga Province on the Costa del Sol.

The blaze started in the Sierra Negra in Coin last night (Thursday August 30) and stretched 12km from Coin to Marbella and Ojen and had burnt more than 1,000 hectares of land at of 9.48am, according to the Malaga Provincial Fire-Fighters Consortium (CPB).

Due to the fire, the toll road from Marbella to Malaga was cut off as well as the road connecting Ojen with Ronda. By this morning the fires in Mijas were declared under control.

Fire-fighters worked all night extinguishing a forest fire which started around 6.50pm in in the Cerro Alaminos park in the inland municipality in the Malaga Province.

It started at a time when there were strong warm winds which blew the blaze down to Urbanizacion Barranco Blanco by Alhaurin El Grande around 8.15pm, engulfing many homes.

While it was still light, helicopters and planes brought water to try extinguishing the flames, but nightfall came and the ground fire-fighters were left to battle the blaze.

The side of the Carretera de Coin was filled with people who lived in the area or were passing by, stopping to view the scene of destruction before them.
Jesus Angel Gonsalez, 23, said was able to see the plumes of smoke from Malaga were he worked and was one of many on the side of the road, before he realised that the flames were heading to his family’s property, so rushed off to prepare to evacuate.

Others had already evacuated what animals they could, including dogs and cats and some horses, but the farms in the area had to abandon their livestock to fend for themselves. Foreign residents requested that 140 dogs, 50 cats and three horses be evacuated from the area, which is populated by farms.

The road down from La Atalaya towards Fuengirola was jammed with people evacuating the area around 10pm and the road up was cut off. The flames were blown down the back of La Cala Hills. “I had prepared a bag filled with all our official documents and my jewellery and anything we might need overnight,” said Claire Simmons who lives in an apartment in La Cala Hills with her boyfriend. This came in handy when they saw the flames dangerously close to their apartment.

“The roads were all jammed up and I saw one man in a car with his hand out the window leading his horse. Around 200 guests at Hotel La Cala Golf were evacuated and soon after the flames passed the north of Riviera and reached Urbanization Cascadas de Calahonda, prompting further evacuations.

Social networking sites like Facebook were alive with people informing of what was going on and urging people to prepare to evacuate if necessary.
Sometime between 1am and 2am the Military Emergency Unity (UME) was brought in.

By 3am the fire reached Ojen and Marbella and more people were reportedly evacuated with the help of taxis in the area. At 3.30am it was declared the most devastating fire in recent years in the province and out of control.

A block of apartments in Elviria Hill (Marbella) was engulfed and Urbanisation El Rosario evacuated to Antonio Serrano Lima Sports Pavillion.
The two people injured came from the El Rosario area and where taken to Hospital Costa del Sol to be treated for burns to 50 per cent of their body around 4am.

Ojen village was evacuated around 4.35am to Marbella or Monda. By 5.25am Urbanisation Loma de Las Palmas in Marbella was also affected. The fire continued out of control at 6.05am and ground fire-fighters waiting for the planes and helicopters to assist them.

Between 25 and 30 families in the Alpujata area were evacuated. Around 30 aircrafts were working towards extinguishing the flames by 8.25am with access to Urbanisations El Rosaio and Torre Real in Malaga cut to traffic.

Morning weather conditions were more favourable with very little wind and humidity levels which rose during the night. Fire-fighters from the municipalities of Malaga, Marbella, Benalmadena and Torremolinos, as well as those from Malaga airport assisted in the operation.