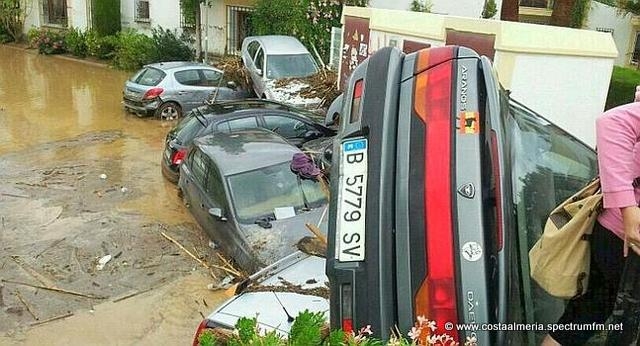 EIGHT people, including a nine-year-old girl, have died as floods created mayhem across southern Spain.
Torrential rain which started before the weekend brought chaos to areas of Malaga, Almeria and Murcia and by Saturday morning, the floods had claimed the lives of eight people and turned many parts of the region into no-go areas.

The first tragedy came on Friday when an Alora woman in her 80s died in El Puente. By dawn on Saturday, seven others, including a nine-year-old girl trapped in a car washed away by the floods, had joined the tragic list of victims.

The girl and an elderly man died in separate incidents on Friday in Puerto Lumbreras. Both were from the hamlet of El Esparragal.
A third confirmed death in the Murcia region was also found in a car in the Regueron canal in the hamlet of Sangonera la Verde.

The body of a 50-year-old woman from La Torrecilla in Lorca reported missing on Friday was found early on Saturday morning inside her car in the Los Olivos park.
There have also been four deaths in the Andalucia region; three in Almeria and one in Malaga province.

The woman in her 80s died in Alora at her home in the El Puente neighbourhood due to the river overflowing.

Another elderly woman died at Hosital de La Inmaculada de Huercal Overa after being evacuated by Maritime Rescue helicopter in a residential area of Vera Playa (Almeria).
The heavy rains in the area reached 120 litres per square meter.

The bodies of a man and woman were found together in their car in Cuevas del Almanzora (Almeria).
A 52-year-old British woman who works at Hotel Vera Beach has been reported missing.

A man who was in a critical condition passed away in the afternoon during the transfer by helicopter Vera by the Maritime Lifeguards to La Inmaculada Hospital in Huercal Overa.
Two others, a man of around 71 years of age and his wife,both from Aguilas but who have a property in the area, were found inside their vehicle which had been covered in mud in Guazamara Rambla, Cuevas del Almanzora at around 8.50pm.

The road from Bedar to Serena , below La Fuente was cut off by flooding  as a result of torrential rain which started in the early hours of Friday morning and continued on and off throughout the day.

The Club Itica Vera stables were flooded and one of their seven horses has disappeared.

A goat herder has been left destitute after his 200 sheep were swept away in the floods.

Police are going door to door in Pueblo Laguna, checking to see if people are alive, especially in the ground floor properties many of which are completely flooded.

The heavy rains caused a torrent of water to pour down the mountain to the football ground, passing underneath it, bursting out through the banks into the valley below and following the course of the old river bed.

Electricity poles were damaged and water flooded the roads making them impassable and blocking the road to Serena and villages in that area.

Many homes and garages had some flooding and a section of the road and mountain collapsed onto the gardens below partially covering a parked car with rubble.

The emergency 112 number in Andalucia has registered 260 incidents in the Malaga Province and another 350 in the Almeria province on Friday due to the torrential rains.

Three hundred people in the Malaga province and 280 in the Almeria were evacuated. Of these 200 were evacuated from Vera Beach by bus and Maritime Rescue Helicopter helped in the rescue of 80 people stranded at restaurant Vera Playa who were taken to the acuatic park area.

Hospital La Inmaculada in Huercal-Overa has experienced extensive flooding and may need to be evacuated.

Hospitals of Torrecardenas and El Toyo in Almeria City, Baza (Granada) and Lorca (Murcia) have been alerted to prepare for the arrival of patients.

More than 1,000 emergency workers across the Malaga and Almeria provinces are working during the crisis.