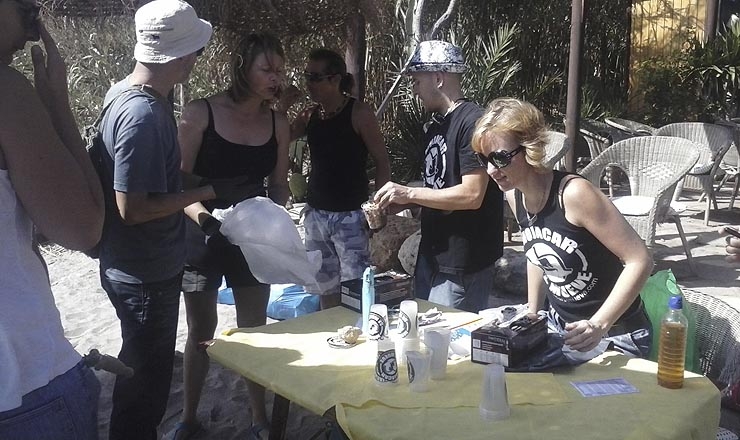 VOUCHER REWARD: Those taking part were rewarded for their effort.

FIFTY children and 100 adults helped clean up litter on Mojacar’s El Cantal beach. The clean-up was organized to complement the environmental awareness campaign “All you should leave behind are your footprints” “Mojácar se Mueve”.

El Cantal beach is one of the worse areas affected by the ‘botellon’ drinking parties and the litter left behind and the machine that cleans most of the beaches cannot access this area.

The clean-up was mostly about creating awareness of a problem that would be non-existent if people were more conscious of their negative effect by not cleaning up after themselves.

Councillor Jessica Simpson believes that the best way to start making an impact and change is by working with children.

The event started at the beach bar El Patio, where children were supplied with the necessary materials for starting the clean-up, gloves, containers etc. It was organized like a game and they concentrated mostly on collecting cigarette ends which are the most difficult for the machines to clean up.

Each plastic cup full of cigarette butts collected was exchanged for a voucher-reward for the effort and collaboration, this voucher can be exchanged at any of the following bars: El Cid will provide ice cream; AKU-AKU will provide soft drinks and Pachamama beer for the adults.

Since the activity was carried out in the area of the beach bars, they all offered to join in.

Older children who can work a bit harder and collect more litter were rewarded with vouchers for free ten pin bowling games thanks to Ozone Bowling Mojácar.

The day before, the Mojácar Diving club carried out an underwater clean-up event in the same area so the two activities were joined with the same purpose, helping with the maintenance and cleanliness of our coast and as an awareness campaign for all, visitors and residents alike.

“We would like to thank all of those who participated, especially the children who managed to collect around 13,000 cigarette ends,” said Simpson.

More than 100 big bags full of rubbish, mostly consisting of plastic straws, glasses and bottles, broken glass and other non-biodegradable waste, was collected.

The Sailing club cleaned the area in front of the Ferreteria Lopez with four industrial bags full of rubbish.

Many businesses collaborated by providing drinks, food, ice-creams and prizes and mini-golf G-Spot let all the children have free games after the event and cooked a paella.

“It was a great day with a great example set as well as being educational and effective,” said Simpson.