Devastation for the Summers 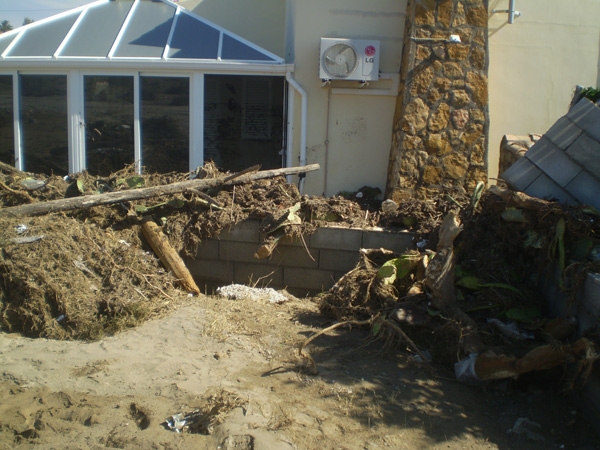 Now imagine the shock and horror when Ron Summers and his wife returned home just after the floods to find that their lovely home that they had bought just 5 years ago was totally and utterly destroyed, along with that of their neighbours` whose pool was all but invisible and their vehicles washed out into the sea of mud.

These houses had been built by a Spanish builder slap bang near a river bed, with no more than a metre between the house and the river, where in fact it should have been around 12 metres apart.

The Summers` had been to visit their solicitor trying to solve problems coming from the legal situation of the homes and could not get back due to the storms.

On arriving, they found waist high water had destroyed their furniture and their personal belongings and they were forced to spend two nights sleeping in their car. The insurance agent was helpful but said that the decision on compensation would come, as is the norm, from the Consortium. The approached the Town Hall together with a translator and were issued the documentation needed to present their claim, told they needed to go back and take photos, make a full inventory, which is difficult because everything is under water and mud, and given a period of five days in which to be register the claim.

They had not been able to contact the insurance consortium, they were not offered any temporary help, and they had to rely on the kindness of neighbours who rallied around to offer their help and support. Since going to press the Summers have been kindly given the use of a home and they are so thankful to their neighbours and friends.

Ron has just recovered from a heart bypass and a thyroid operation, so this stress has taken its toll on the couple. Ron`s wife became very emotional during our interview and was deeply distressed at the death of their cat and the loss of a lifetime of photos. They can only hope that the paperwork goes through in time that the problems surrounding the build disappear, and be thankful they were not in the property at the time as they would surely not be here to tell their story.