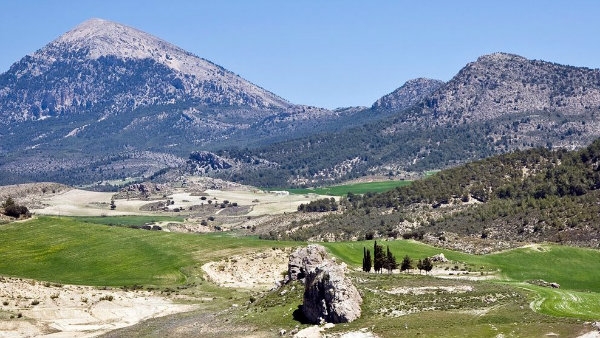 THE clinical definition of geodiversity is ‘a variety of geological environments that make landscapes’. To say simply that Spain has many ‘contrasting landscapes’ is a monumental understatement. Contrast Galicia, Spain’s northwesternmost region, with its lush green valleys to parts of dry Almeria, officially designated as Europe’s only true desert region. Adjacent to Galicia is Cantabria with soaring peaks that abruptly give way to the Basque Country and Navarre, which are areas of flat-topped hills and undulating Mediterranean vineyards. Even Spain’s coastline is a study in contrasts. The rocky shorelines of Costa Brava (‘the rugged coast’) and the jagged northern Bay of Biscay bear little resemblance to the white sandy beaches of Spain’s western Costa La Luz and Costa del Sol. At or near Spain’s extremities, the mighty Pyrenees and the Sierra Nevada of Andalucía have numerous peaks above 3,000 metres. Even Spain’s great interior ‘meseta’, which represents 40 per cent of the Iberian Peninsula, has elevations that range from 700 to 900 metres. Many people are surprised to know that the average ground elevation in Spain is higher than any European country except Switzerland. To say that Spain is a land of geodiversity is merely stating the obvious. This article directs your attention to a remote northeastern corner of Granada, an area known as the Altiplano. It is here in a quiet, high plains’ region in which landscapes become even more uniquely diverse. Consider…
Granada’s Altiplano region is an area of high plateaux, deep canyons, river headwaters, convoluted badland landscapes, caves, salt marshes, hot springs and fresh water lakes, all shielded from the outside world by imposing mountain ranges. This amazing spectrum of geodiversity is due to the fact that eight million years ago (think geologic time!) much of the Altiplano formed an inlet connection between the Atlantic Ocean and the Mediterranean Sea. Over time this basin was transformed into a landlocked area cut off from the sea. The subsequent water erosion carved landscapes into a spectacular array of geological formations in nearly every corner of the Altiplano.
Look to the horizon in any direction within this area and you will see the mountain ranges known collectively as the Sierras de Altiplano. These basin and range mountains provide a number of natural corridors for entering and exiting this inner plateau of geodiversity. The varied environmental characteristics of the Sierras, namely the geology, the micro-climates, slope orientation, and altitude differences have fostered the development of a wide variety of forest species – Holm oak, various pines and junipers, even repopulated California redwoods. The Sierras de Altiplano act like huge water tanks that pump ground water into the landscape below. Over time, this has produced countless canyons and ravines, salt marshes interspersed with green meadows, complex cave systems and erosive badland topography. The uniquely carved badlands and dry river beds around Gorafe and Cuevas Del Campo, for example, are some of the most tortured yet colour-laden topographies you will find on the Iberian Peninsula. Colourful gypsum, sulphur and limestone deposits (near Baza and Benamaurel) add to the poly-chromatic display. In those areas where the erosive badland landscape cannot drain rainwater and mountain run-off, the unique Altiplano salt marshes can be found. The dry river bed of Salar del Margen near Cullar, for example, is a salt marsh which has one of Spain’s most comprehensive fossil records. It was recently recorded in the Andalusia Wetlands Inventory as ‘the most continuous environment for charting the last seven million years of fossil records in our planet’s history’.
The presence of large earth fractures (some visible, some not) also give the Altiplano the many hot springs that dot the region. These fissures favour the circulation of deep ground water which rises to numerous bubbling hot springs. The deep fractures also form surface aquifers giving the Altiplano yet another geologic dimension of numerous fresh water lakes. The Zujar Baths (near Frila and Zujar) situated below the ancient volcano Cerro Jabalcon is an example of a bubbling hot mountain aquifer situated alongside the natural Lake Negratin.
The Altiplano region of Granada is about a one-hour drive northeast of the city of Granada. The Guadix/Baza basin forms the major east/west axis while the Sierra de Carzorla approximates the northern boundary. Much of the landscape discussed above is in officially designated natural parks, wetlands, and species protected areas. The unspoiled natural surroundings, abundance of wildlife, extensive hiking trail systems attracts photographers and outdoor enthusiasts. The surprising wild desert and mountain expanse is of tremendous value to the environment in that it is such a rare commodity in Europe. One would be hard-pressed to find a more concentrated spectrum of colours, land-forms and geologic formations than the isolated region known as Granada’s Altiplano. Enjoy and travel safe!