Malaga CF got a historic victory against AC Milan 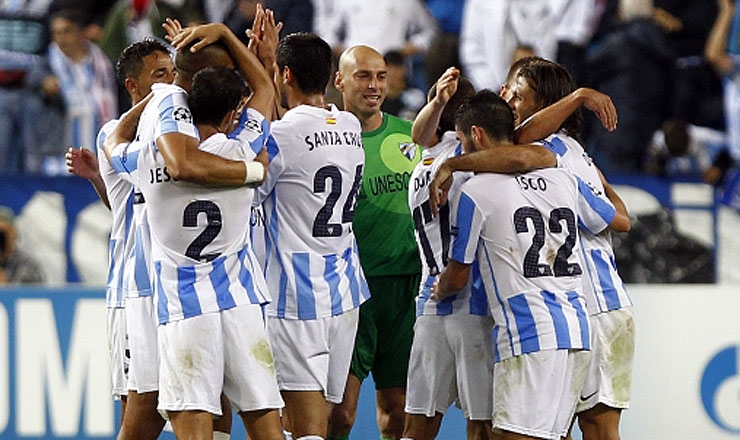 Málaga CF continue to make history in their UEFA Champions League debut. Their 1-0 victory against Milan, thanks to a goal from Joaquín, allows Manuel Pellegrini’s team to take a big step forward in the competition. Málaga are Group C leaders with nine points.

Málaga CF started the game looking at ease on the pitch and determined to gain possession.  However, the first shot at goal came from Milan through Montolivo, though it posed no real danger for Willy Caballero.  With an electric atmosphere throughout La Rosaleda stadium, the Blue and Whites were determined to make history yet again, and defeat one of the biggest teams in European football.

The ‘Malaguistas’ didn’t hesitate in setting the pace of the match, though they were finding it difficult to get close to the penalty area.  Milan were also desperate to get on the score board first, and a shot from El Sharaawy from the right in the 25th minute, was the closest chance of the match so far.  Allegri’s men spent the next few minutes centred around Willy’s penalty area, though they didn’t create any further opportunities to score.  However half an hour into the game, a pass from Emanuelson on the right led to a powerful distance shot from El Sharaawy, though the ball hit the ‘Malaguista’ goalpost, crushing their dream of a 1-0 lead.

A counter-attack by Joaquín in minute 34 was picked up by Isco in front of the six yard box, but the ball just missed the goal.  Just two minutes later, a frenzied display by Iturra, Portillo and Joaquín resulted in the ball again landing with Isco, who had another shot at goal, though it was saved by keeper Amelia, and a corner kick granted.

The match could have taken on a different dynamic in the 42nd minute; Milan defender Constant pushed Jesus Gámez inside the penalty area, which resulted in a penalty for the Blue and Whites, and the defender shown a yellow card.  As in last Saturday’s match against Valladolid, Joaquín took the penalty, though he sent the ball way over the post.

Heavy rain marked the start of the second half, with an initial three chances for the visitors, causing unexpected trouble for Willy Caballero.  From then on, Málaga regained control of the ball, showing a first class defending display.  Another attempt by Montolivo minutes later was easily saved by Willy without any problems.

Again in an almost repeat performance of Saturday’s match, in the 63rd minute Joaquín scored the only goal of the match, following a pass from Iturra. The ball sailed into the net after first hitting the goalpost, resulting in Málaga taking the lead by 1-0, and Joaquín’s missed penalty soon forgotten.

Manuel Pellegrini’s men weren’t going to stop there.  Just two minutes later, Eliseu had the chance to show off his powerful scoring ability, as he did in Brussels, though the ball just missed Amelia’s penalty area.  Milan’s Pazzini tried to replicate the goal in the 69th minute with a header following a pass from Bonera, though he had little strength behind the ball.

A series of counter-attacks from both teams followed in the next few minutes of play.  Two Milan corners failed to result in a goal, and the ‘Malaguistas’ slowed down their pace to concentrate on possession.  Milan went all out on the attack having every striker on the pitch.

El Shaarawy was Milan’s last real chance to equalise in minute 84, with another hard shot, though it was no match for Willy Caballero.  Demichelis proved crucial in the resulting corner kick, as he deflected a pass from Mexès which could have seen the visitors join the leader board.

Pellegrini brought on Onyewu in the final minute to face his former team, in substitution of Portillo, who again performed well, and continues to show great improvement.

This historic victory sees Málaga CF Group C leaders with three out of three victories, giving a total of nine points, and an important step forward towards the next round.