Mystery evolves during making of film 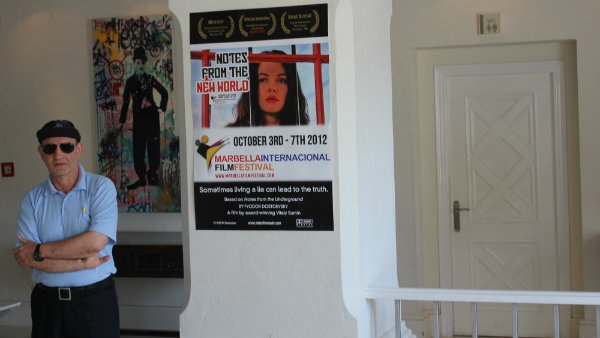 Notes from the New World was one of 65 films selected for this year’s Marbella Film Festival. Nicole Hallett caught up with writer and director Vitaly Sumin.

A TALE of mystery, murder and love, this exciting new movie from VM Productions is a retelling of Fyodor Dostovesky’s classic novella ‘Notes from the Underground’.

It is a love story set in Los Angeles. American actor Steven (Nathaneal Theisen) is torn between two women, the Russian Mafia and millions of dollars. He gets a part in a modern adaptation of Dostovesky’s masterpiece.

While preparing for his role he meets Sonia (Natasha Blasick), an ‘angelic’ 18-year-old illegal Mexican immigrant and 23-year-old Russian call girl Irina (Rebecca Sigl) who is given the part of a Russian prostitute in the play. Steven finds himself torn between the two women.

The plot thickens when the Russian Mafia enters the picture looking for a box that used to be in Irina’s possession. Murder and accidental death occur along the way. “It is like a Greek Tragedy,” said Vitaly. “A dark funny comedy.”

Although set in 2009 Los Angeles (USA), inspiration for this film originally came from St Petersburg in Russia, where Vitaly is from. “Much of Russian architecture and culture was brought from the west. In the same way, culture in LA is not all its own, which is reflected in the film.”

On another level it suggests the state of the post modern/post communist world and possibly the realization of Dostoevsky’s prophecies as far as the Underground Man’s dilemma regarding love and terrorism.

Vitaly took great care in selecting the actors for the parts, interviewing “around 500 people” for the film which was shot over 21 days. However, during the making of the film key members of the cast and crew abandoned the production after strange things happened following the ‘disappearance’ of screenwriter Robert Hurley.

He ‘vanished’ shortly after filing police records indicating harassment from a tall man prowling around his car in the parking lot. An in-house investigation was carried out by key members of the film’s cast and crew, documented on video as they unfolded. It is discovered he has ties to the Mafia and a secret occult cult, basis for two of his movies, Notes from the New World and the previous Shades of Blood respectively.

The Missing Screenwriter was the winner of the 14th International Festival of Detective Films Moscow 2012 in April. “It is like a movie within a movie,” said Vitaly. “Robert Hurley never actually existed. I created him and made the cast and crew believe he was real so that the movie seemed real, in the style of the Blair Witch Project. It is a faux documentary.”