Let Loose the Dogs of War 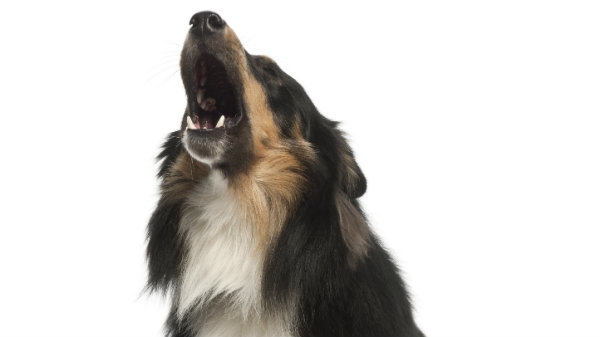 BARKING MAD: Tearing her hair out

SHAKESPEARE has possessed me and is exerting undue influence upon me (which means I get all the angst without the talent), So until he ups and leaves you will have to put up with the references I’m afraid.

I’m positively Elizabethan at the moment, all red hair and white face glancing out to sea holding a wan hand up to my eyes and contemplating murder most foul. Not, I hasten to add, of king or Captain, but of the canine variety. For the past two days and nights the dog next door has been howling like the Hound of the Baskervilles (don’t worry Conan Doyle is only visiting). I feel like I have woken in a wolf-infested forest of the late 1500s and am half expecting the sound of huntsmen on horses or the odd Tudor monarch traipsing through the undergrowth looking for the Golden Hind or a tasty boar or two.

I wonder what Henry V would have done had he moved in with me (probably have me executed as a witch), put on his armour and threaten the dog’s owner, stand on a mound and give a motivating speech or batter down the garage door and let the dog loose whilst crying havoc? I guess if the damned dog was called Spot I could plumb for the obvious cry of “out damned Spot, out I say!” and hope for the best. At present humour is the only thing that’s stopping me from pulling out my hair and casting a spell.
I do however wonder at the selfishness of dog owners who allow their pets to disturb the peace and quiet of a neighbourhood. People complain about cats but cats don’t bark all night or foul the pavements and unlike dogs they at least chase away rats and cockroaches.

Anyway, let us not dwell on the negative but celebrate the positives. The temperature is moderate, the sun still shining and it’s time to dust off the boots and scarves and all those lovely jumpers that hide a world of naughty lumps and bumps caused by cakes and beer and doughnuts consumed in gay abandon on hot beaches.

I love winter wear as much as I hate winter weather (hence the move to Spain) and am looking forward to treating myself to yet another pair of boots from the market (cunningly designed to last exactly one winter before crumbling to dust in the wardrobe. The reason for this excess of goodwill towards myself is the joyous fact that at last I am changing career and will finally be employed to do something I love. My fifth decade looks to be on course to be a good one and while I will continue to feel sadness at the loss of my youth, I will stride forward into a new challenge like Henry V on the field of Agincourt surrounded by his exhausted but enthusiastic men (unfortunately I have neither exhausted nor enthusiastic men surrounding me).

As far as barking dogs I’ll take Henry Vs advice and “Stiffen the sinews, summon up the blood, disguise fair nature with hard-favoured rage; then lend the eye a terrible aspect.” Either that or I’ll howl at the dog until it stops or someone calls the police.