Round up of sport news for the Costa del Sol 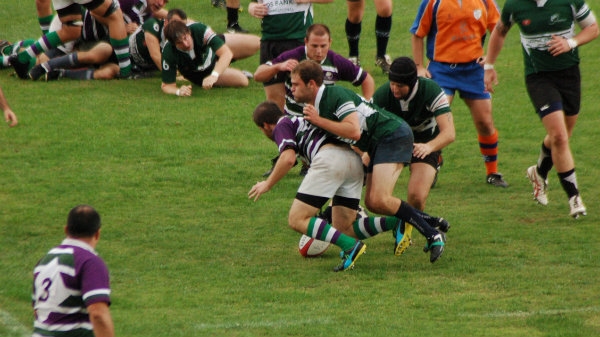 Close call for the seniors

MARBELLA rugby club 1st XV started the season with a difficult away fixture at Malaga. The Malaga club are a very strong team whose first team play in the national league.

It was a close game with Malaga winning by the narrow margin of 19 v 17. Despite the loss, it was encouraging to see a large number of the U19 and U20 team play for the senior team. This is a great endorsement for the club who are producing players that can pass from the U18 directly in to the senior team. It also is very encouraging for the future development of the senior team.

Meanwhile, bad Weather did not stop play. After several days of horrendous weather, Marbella rugby club played two matches against the U16 and U18 teams from Hull Collegiates of Yorkshire, England, on Tuesday, October 30.

The first of two matches was contested between the U16s of both clubs. Despite the torrential rain Marbella played open running rugby and won convincingly 34 v 5, a result that was made easier by the fantastic performance of Javier Garcia de la Pena.
The physical running forward was destructive with the ball, creating opportunities for others to score. Marco Spinetti also had a fine game with two tries for Marbella.

In the second match, Marbella also ran out convincing winners, 27 v 10. In the first half Marbella started with their strongest possible team. Winger Sam Parry scored a hat trick of tries to go on and be awarded man of the match. The second half was a different affair, as Marbella played their 2nd XV, who defended really well but could not hold out the visitors.

The school from Yorkshire had a touring party of 65 children, which also included a girls hockey team. A post match meal was enjoyed by all the children and coaches.

BASKETBALL fans in Mijas can take advantage of a special bus service to see Malaga´s Unicaja team take on Poland´s Asseco Prokom. Tickets for the November 23 game, including transportation, are just five euros. The coach is being laid on my Mijas Council´s youth department, but the trip is open to all ages.

For more information contact the Mijas Youth Department in the Las Lagunas theatre.

A NEW cross country running season started last Sunday (November 4) with the 15th annual edition of the Villa de Algarrobo races. The day of running now attracts some of the best runners from Malaga province. This year the winner of the main 8,350m race was Ruben Espejo, of Nerja-UMA and potege of Jose Manuel Cerezo, coach at Mijas.

BENALMADENA Racquets Club is holding a paddle tournament and family fun weekend from November 23 to 25. Organisers say the idea is to focus on the enjoyment of the whole family with many activities planned for players and non players alike. More info on 952576801.

BASKETBALL fans are being invited to enter a new league in Mijas.

Open to up to 12 teams it is being organised by the Mijas Basketball Club. Players must be aged 16 and over. Each team will have to pay a 50 euro entrance fee plus 35 euros per game subscription.On top of that every player will have to pay a joining fee of €25 which covers expenses and sports insurance.

HEAVY rain forced the postponement of last Sunday`s planned Pinktober race in Marbella. The town council was forced to put back the charity run until November 18. The race, being organised in conjunction with the Hard Rock Café, is being held to raise funds for the Spanish Association Against Cancer (AECC). It is the 10th time overall and second time in Marbella the event has been held. Entrance cost 10 euros adults, eight euros children. Tickets available from the Hard Rock Café, in Calle Ramón Areces.

ESTEPONA is being promoted as European City of Sport 2013 at this week´s tourism fair World Travel Market (WTM) in London.  The town`s aim is to relaunch itself as a tourist destination where all kinds of sports can be enjoyed thanks to the “first class facilities which we have and the good climate that allows outdoor activities during the twelve months of the year ,” said the councilor for tourism, Marina Segovia.

MIJEÑO David Tovar can call himself champion of Spain in endurance moto-cross after the last test of the season in Porriño, Galicia. He had entered the event within touching distance of picking up the title and sixth place was enough for the M Ortiz Marbella team member to come out on top. He dominated the season with three wins, one second, one third three fourth places and two sixth places

LAS LAGUNAS pool hosted its second regional contest in a row when 272 swimmers took the plunge in an Andalucian Swimming Federation organised event.

Aiming to improve the swimmers´ competitive fitness and technique to regional and national standards the Mijas Swimming Club entered 39 competitors. Last Saturday´s event was the second of a planned six competitions to take place.
Top results for Mijas juniors came for Carlo Jurado who was first in the 200m butterfly and 200m backstroke.