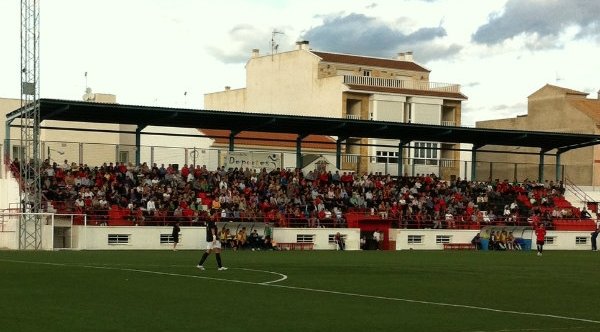 THE FIRST defeat of the season at home for Huercal Overa CF was seen by 800 passionate fans at El Hornillo.

First chance was for the home team in the first minute, when Sele´s cross from the left found Benitez in space, but he fired past Juanfran in the Pulpi goal. In the 6th minute the visitors had there firs chance, when after a cross from the left wing by Lee found Miñan unmarked but his header ws well above the crossbar. Moving into the 13th minute a free kick by Sele was parried by Juanfran to the feet of Alex Miñarro who fired wide a yard from goal. The game was fought in the middle of the park for the remainder of the half with both teams not wanting to give anything away.
The second half was dominated from start to finish by Huercal Overa CF, with the importance of the game passions boiled over and the second half was littered with fouls and free kicks. The possession of Huercal Overa didn’t translate into any real goal scoring chances and, in the 75th minute, came controversy when Juan Martos was felled by a Pulpi midfielder. As he lay on the ground play continued with Pulpi in possession with Mecca on the right wing.
Many in the crowd thought that the ball should have been put out of play but Mecca played in Cristian who rounded Finidi and fired home past Michel in the Huercal Overa net.
The home crowd were furious and made this known to the officials in a very passionate vocal manner. Huercal Overa tried to get one back to level the game only for an Alex Minarro free kick to smash into the crossbar in the 83rd minute.
Next up for Huercal Overa CF is a trip to CD Plus Ultras and the club hope to have striker Tomas Campanas back in the starting line up after serving his 1 game suspension. Keep up to date with the club at www.huercaloveracf.com or contact [email protected]