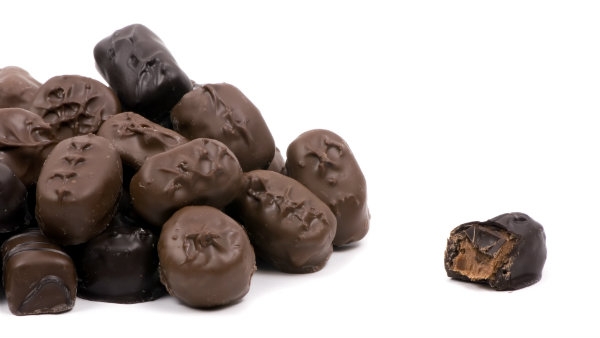 CHOCO BITES: How many calories?!

As I write this I am in the UK. Although I have never attempted space travel before, it does feel as if I have landed on another planet! I am trying to re-enter the atmosphere at as slow a speed as possible in order to appreciate all the differences, good or bad, to Britain as I used to know it, and indeed Mallorca as I know it now. But goodness me, UK haven’t you changed? Or have I just forgotten what it is like to be here?

First stop is Marks and Spencer’s food hall at the airport for a sandwich, and some interesting things called ‘Choc Bites’. Then it’s straight to Smiths for newspapers, and then on to the train. No one talks to each other on the train, that rule seems to have remained the same anyway. I turn my attention to my mobile lunch and nom down the sandwich (classic egg mayonnaise and cress on malted brown) in record time. Why can’t the Spanish make a decent sammie? They never have any moisture or freshness about them do they? And there’s no variety either, there’s only three choices, Jamon, Queso, or Jamon and Queso. Egg and cress isn’t asking too much is it? But then, I crack open the ‘Choco Bites’ and as I pop one into my mouth idly read the ingredients. I almost spit the bloody thing out (almost, but no, it is a sin to spit out chocolate) when I realise in this tiny, tiny, tiny slip of a thing there are over 200 calories. What? That means in the bag of 5 ‘Choco Bites’ there is a total of 1,000 calories. I stuff them back into my bag. Make them last McLeod, I tell myself.

I have to change at Birmingham New Street station so I prepare to step out into the cold evening air; what I am not prepared for is the stink. The station reeks of diesel, everywhere, on the platforms, in the ticket office, waiting room, everywhere. Is that a new thing? Is this because I now live in the relatively fresh air of Mallorca that I am super sensitive to smell, or have railway stations just got stinkier whilst I have been away? I am lured again to the takeaway stands and soon enough am clutching a super sized cup of coffee and (sucker) two cookies. Thankfully these cookies don’t come with a calorie counter so I eat them in ignorant bliss, then dig out the ‘Choco Bites’ and think, ‘in for a penny, in for a pound’ and they go the same way. To be honest, they weren’t all that, it’s only greed.

Eventually I reach my hotel, which is a Premier Inn. I am disappointed to not be welcomed by Lenny Henry, but soon enough I am installed in my new reasonably comfortable room and directed to the restaurant. Again I cannot resist my curiosity to see what is on the menu. I have to call my husband back in Mallorca to tell him what is on the menu: it is pie night, and not only that, it is all-you-can-eat pie night. He seethes with jealousy and tells me that he loves pies more than he loves me. So of course, I have to try them, but they’re not as good as I imagined they would be. And then I roll into my room for a night’s kip.

In the morning, I rock back down to the restaurant for breakfast, it’s another a-y-c-e extravaganza. All you can eat bacon? Has the world gone mad? I decide not to call my husband again as bacon ranks higher than pies, which means he loves my breakfast more than me as well. The breakfast hits the spot, they even have crumpets, but I’m not hungry after yesterday’s eatathon. On my way to my first meeting, I calculate that I have already consumed double the calories that I should have in the past 18 hours and I have another five days to go. Perhaps I should be walking to my meetings rather than letting the train take the strain.