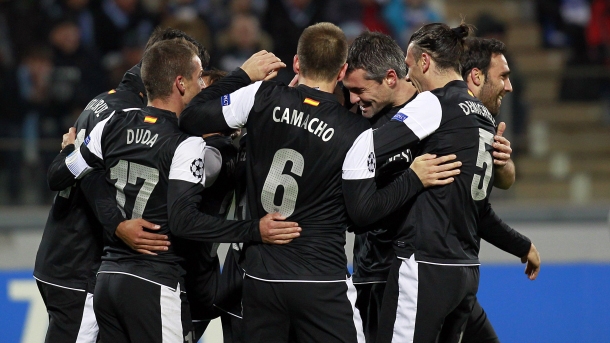 Málaga CF has qualified to the next stage of the UEFA Champions League in first place in Group C, following tonight’s draw against FC Zenit in St. Petersburg (2-2). Manuel Pellegrini’s men have sailed through to the next round in the top spot, with one match left to play. The Blue and Whites will face Anderlecht at La Rosaleda on 4th December.

Conscious of the need to win this match in order to continue on in the competition, Zenit got off to a good start in the game, determined to gain early control.

However it couldn’t have gone worse for the local side when a shot from Seba from the right, to Santa Cruz in front of the penalty area, landed at the feet of Buonanotte who crashed through the Zenit defence to open the scoring.  The Blue and Whites were a goal up in the 8th minute at the Petrovsky stadium.

Only a minute later, before the Russian-based side had time to breathe, Santa Cruz took advantage of a poor pass from goalkeeper Malafeev.  The Paraguay-born player passed to Seba who scored goal number two for Málaga.

A chance came for Hulk in the 15th minute from a free kick directly in front of the penalty area, sending the ball to the left of Caballero’s goal.  Demichelis was awarded a yellow card as a result of the foul, meaning he’ll miss the final group stage match against Anderlecht at La Rosaleda.

Zenit retaliated with a dangerous counter-attack, though their actions were quite clumsy in their search for a goal.  In minute 22 Kerzhakov tested Willy Caballero’s reactions with a shot at goal that deflected off the Argentinean-based keeper, who’s conceded the least number of goals so far in the competition.

Manuel Pellegrini’s men continued to pile the pressure on the home side in midfield, forcing Zenit to play a more vertical style of play in their search for a goal.  Málaga CF performed well in the cold conditions at the stadium located near to the Neva river.

An impressive save by Caballero in the last minute of the first half prevented a possible goal by Danny, who took advantage of a promising pass from Hulk from inside the Málaga penalty area.

The second half got underway in much the same vein as the first, with Zenit determined to reach the Blue and Whites goal.  An early chance came for Shirokov that went way over the crossbar.  It wasn’t until minute 48 when Spalleti’s men got on the scoreboard with a goal from Danny, which was well received by the home fans.

The Russian-based team continued on the attack with a renewed determination to level up the scoring.  Good play from Kerzhakov kept Willy on his toes, though the ball ended up on the outside of the net.  Another two close calls for the Málaga defence forced them to step up in order to maintain their lead.

A Duda free kick in the 61st minute from 30 metres away proved a good test for Malafeev, who sent the ball to a corner.  A subsequent header into goal from Seba landed too far to the right of the Russian goal.

Málaga appeared to have overcome the Zenit pressure on the pitch in the second half by minute 70, and began to retaliate with chances for Toulalan and Buonanotte.  The St. Petersburg-based team continued in their search for an equaliser, and another chance for Kerzhakov from in front of the six-yard box failed to get a goal.

Continuing their upfront style of play in their search for another goal, Zenit created another two chances with impressive play by ex-Sevilla player Kerzhakov.  Spalleti’s team appeared to be very much back in the game.

Another important save by Willy in minute 82 prevented a second goal from Danny, ever-prominent in the Zenit attack.

Luck wasn’t on Málaga’s side towards the end of the match.  Fayzulin scored the equaliser for Zenit with just four minutes of normal time left to play.  The former Racing de Santander striker took advantage of a powerful pass from Hulk, who couldn’t quite make it to the goal line.  The score was now 2-2.

Another chance came for Fayzulin only seconds later, but Willy sent the ball to a corner kick.  When it looked as though Málaga could have had the last word, with a chance for an un-marked Buonanotte in front of the Russian goal, keeper Malafeev kept the scores even.

The match ended with each time gaining a point.  Málaga CF, dressed in their black strip, leaves Zenit with minimal options to continue to the next stage of the competition.

INFORMATION:  Fourth group stage match of the UEFA Champions League, held at the Petrovsky stadium in St. Petersburg in front of 18,000 fans.