NINETEEN ARRESTED IN SPAIN AND UK IN PEOPLE SMUGGLING INVESTIGATION 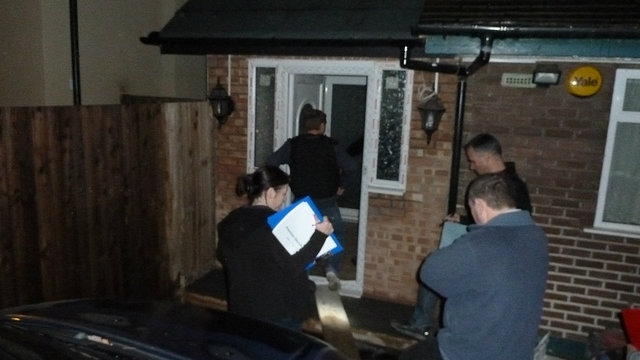 UK Border Agency officers and the Guardia Civil have arrested a total of 19 people in the UK and Spain as part of a major international investigation into a suspected organised crime gang involved in people smuggling.

Operation “MARLO” involved UKBA and Guardia Civil raids on addresses in Alicante, Madrid and London on Monday 26 November, and a further arrest in Hull today (27 November).

The arrests were the culmination of a joint investigation into an alleged criminal network suspected of assisting Iranian migrants to reach the UK from mainland Europe.

The investigation also involved the UKBA Immigration Liaison Office based in the British Embassy in Madrid and the assistance of airlines.

The network is alleged to have organised travel and provided false documents to their clients to facilitate their arrival at UK airports. The eight people arrested in the UK were aged between 23 and 56.

In addition computers, documents and mobile phones were seized from a number of addresses and will now be examined.

Co-ordinated action by the Guardia Civil saw eleven people arrested during raids in Madrid and Alicante in Spain.

The gang is said to have been contacted by up to 100 potential customers per month and was charging its clients up to 18,000 euros each. Of those enquiries, on average 25 per month are believed to have become clients, with 20 per month heading for the UK.

Chris Foster from the UK Border Agency’s Criminal and Financial Investigation team said: “This investigation is targeting an organised network suspected of being involved in a systematic attempt to evade the UK’s immigration controls.

“People smuggling is an international crime which requires international co-operation, so we have been working very closely with our Spanish law-enforcement colleagues from the outset. Our investigation will continue with the evidence we have seized.”

Simon Cooper, UKBA Assistant Regional Director covering Spain, added: “Spain is becoming a hard place for organised immigration crime to operate, and criminals now know that they will be disrupted and brought to justice.”
All those detained yesterday in the UK were arrested on suspicion of conspiring to facilitate an asylum seeker for gain. They are now being questioned at police stations in London.

Anyone with information about immigration crime can pass it on via Crimestoppers at http://www.crimestoppers-uk.org/, or call the UK number 0800 555111. Anonymity is assured.