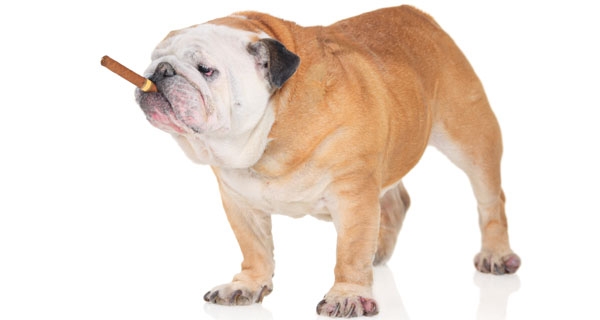 SECOND-HAND smoke, also known as environmental tobacco smoke or ETS, is clearly associated with cancer, respiratory and cardiovascular disease in humans. Several studies have shown that up to 20 different carcinogens contained in tobacco smoke can be inhaled by non-smoking bystanders.

Dr. Timothy Fan, veterinary oncologist at the University of Illinois Veterinary Teaching Hospital in Urbana, explains that although associations between ETS and diseases in animals have not been as extensively researched, a handful of studies show a correlation between ETS and certain forms of cancer in pets.

Dr. Fan explains that longer-nosed dogs may have a higher incidence of ETS-induced tumors for two reasons. “Smokers inhale smoke through their mouths, and it ends up depositing in the lungs. Bystanders, on the other hand, usually inhale ETS through the nose.” Long-nosed dogs’ nasal passages have a greater surface area on which carcinogens may be deposited before reaching the lungs.

“In addition,” says Dr. Fan, “since a longer nose has nasal passages with a greater number of cells, there is a greater chance that one of these cells can be mutated by carcinogens into a cancer cell.”

Colorado State also found that although short- to medium-nosed dogs exposed to ETS dont have a greater incidence of nasal tumors than those unexposed, they do have a slightly higher incidence of lung cancer, possibly because their shorter nasal passages are less effective at filtering carcinogens out of inhaled air before it reaches the lungs.

Unlike humans, who can develop bladder cancer as a result of ETS exposure, dogs and cats generally don’t run a higher risk of bladder cancer when exposed.

As the human-animal bond becomes stronger, we share more of our lives, our leisure time and our living space with our companion animals, and they become exposed to the same environmental hazards that we do. Many of our habits, including smoking, can affect our pets as they would affect any other member of our household.

Designating a smoking area outside or in a physically separate room of the house may be on way to minimize ETS exposure for pets and other non-smoking family members.

For more information about environmental tobacco smoke and your pet, consult your veterinarian.