Electrician made an onion of me 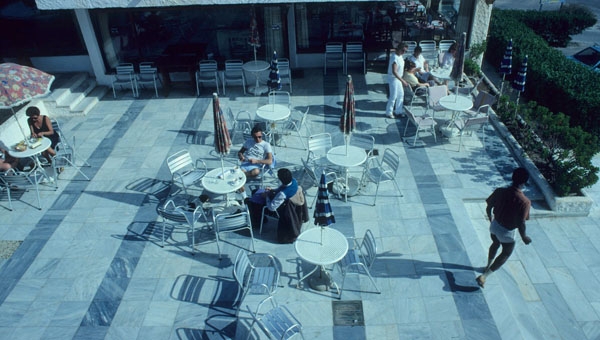 Terrace of the La Gaviota

THE world got flipped early for me.  I hadn’t even heard of the Mayans and their end of the world scenario, but one fact I quickly discovered was that when you sold someone a house and they moved in, they wanted the world to quit spinning and time to stop forever.

Nothing else was ever to be built around them or even dreamt of.  The world was to stay just the way it was forever.

That surprised me.  But, the more I thought about it, it had a ring of truth to it. Besides, the way our construction business was proceeding we would have to quit building as we couldn’t complete a decent finished product in less than three years per house.

One day a client phoned and said she was coming in from Italy with her brother.  He wanted to buy a house too, but wouldn’t unless all was well with hers.

Hell, I had told her the day before when she called that the house wouldn’t be done for two weeks, but the thought of “another sale” got me greedy and made me believe I could change Iberian history.

I went out that night and tracked down an electrician.  Told him I would pay double if he could start earlier than normal and get in the light switches.  He promised he would do it.  “Not to worry it would be under control and finished.”

Damn me. I took a deep breath and slept easy that night.

I finally escaped during my lunch break from another job and visited the Italian home.  It was done.  Perfect. I couldn’t believe it.  And I proudly announced as such to the buyer with a smirk on my face that couldn’t be wiped off.

I could perform miracles in a morning.  I felt good about performing my first miracle and naturally expected sainthood and another quick instant sale.  About two hours later my client came flying into my office trying to beat me to death with her purse!  I presume rending unto Cesar what he deserved.

She was screaming so loudly and her speech was so distorted and convoluted I decided to visit the house with the brother.  He turned a switch on. Click.  Nothing.  Then he quietly strolled over to another switch and flicked that.  Nothing!  I then raced about the premises vibrating all switches.  Nothing!  When he asked to see the fuse box I appeared dumber than an “onion” (as they say in these parts) as I didn’t know where that could have been placed.

My momentary escape lasted but two nano seconds before Guido pried a light switch off the wall in a rage.  Below it was fresh concrete and not a wire in sight.  Dare I say anymore?

Over drinks and dinner and lots of profuse apologies in an expensive restaurant I could ill afford I was subject to a three hour harangue full of curses, innuendos and the nastiest hand gestures than I had ever witnessed in my life.

I was speechless and motionless. Finally both my clients fell silent from exhaustion and I escaped with my life for the evening.

It would get worse in the morning, so I thought I’d let my brother handle it.  I phoned him to say that Mrs Bianchi would be in the office early “to pay him.”

At lunch that day in the La Gaviota restaurant they were all outside on the terrace laughing and best of friends.  Paul not only had gotten the money but had sold the brother a house.  My single mission that day was to get an advance on my salary so I could pay for the previous night’s meal.  I did.  Then went home and sulked.  I had more to learn.  I didn’t want to remain “an onion” forever.