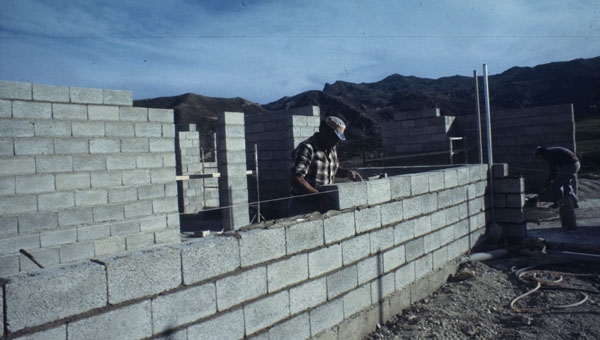 THE construction business was problematic. If there had been a financial analyst living then that did “time motion studies” we would have failed before they started observing. We simply were spending more time apologizing and placating disgruntled clients than working. There simply weren’t enough hours in a normal day to supervise construction and subserviently apologize to our growing list of disgruntled clients.

So, we decided to beat them all at their own game, by just building block walls and then allowing the client come along and chalk out where he wanted a door and where the windows went. That speeded up the process just a little. But, through the client into a tizzy, and what we gained we lost in further time wasting interrogations and then lengthy lying explanations. We openly had to “suggest” whispering in “sotto voce” that the builders could “read plans” but desired, no, INSISTED on a more hands on approach. Feeling the job through the bricks and blocks.

Tactical Eco building long before “green” became popular. (We too had now been turned into lying fools to sustain our own process. You probably have learned by now that lies are often essential courtship in the big and small business practices of this country).

Then it was decided that we had to find “dumber buyers.” Ones not so investigative, examining, nor contentious. We had hoped we could find some “dumber buyers” that wouldn’t cost us so much time—but that circumstance never arrived. Rather more photos had to be taken and we had to bribe every official that worked at Telefonica to get a phone installed in the office so we could make those whining whingeing butt kissing phone calls to our clients begging for more money. Hell, even in my own brother’s house, if you flushed the upstairs loo the gas hot water heater in the kitchen below would ignite and send waves of hot water cursing through the pipes and down the bog.  Innovative it wasn’t but we tried to sell it as such.

Life had turned into one major battle field for making money. As for our trusted, loyal and ever contented singing workers they had been building so long in the traditional method asking them to change was tantamount to barging into the Chinese Embassy, slapping them on the sides of the head for eating food with those outdated chopsticks. Come on, get with it, start using the forks and knives! Try telling any Chinese who continues his old style eating habits to quit making such a flagrant eating error and the expression on their faces will summarize our problems and your own obvious psychosomatic confused indulgences.

Our management had become totally Spanish similar to these present times, lost for direction or lacking any envisioned solution.