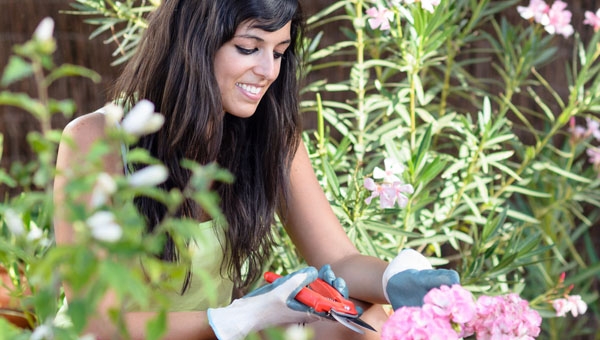 By Clodagh and Dick Handscombe

Although the cutback starts today 7 January a few things were trimmed last week to take advantage of the continuing summer weather. Overgrown herb plants were cut , common sage rosemary lemon verbena stevia marjoram and various thymes, for drying in our tray dryer and in bunches in the sun. But these need taking  inside at night to prevent them reabsorbing moisture. Decorative sages were cut back to provide cuttings to produce new plants for a couple of corners of thge garden that still lack Christmas colour and for friends. But today as soon as it’s light, it’s now 6.30 am, the cutting back of larger plants will start in earnest and the shredder will be taken out of the shed to reduce the volume for the compost heap or number of sacks in the case of the oleander hedge. Luckily we have a weekly garden rubbish collection from the gate.

This week’s cutting back tasks

1.Lantanas have now done their job of flowering from Spring to Los Reyes but now need pruning according to their type and form.

Ground cover trailing purple and white varieties will be trimmed back by half and to shape whether used as low internal hedges or ground cover. The yellow variety wil be just trimmed lightly.

Medium height yellow, orange/red, pink/yellow and yellow varieties will be cut back hard to stimulate early budding and close flowering in the spring. Flowering growth  will be cut back  hard just leaving one or two budding points on each stem.

Standards need cutting to shape to stimulate side shoots and create a round head.

Climbing pink/yellow, white and orange/red varieties can be trained to grow up and over walls and as boundary hedges. Prune side shoots and leave the tallest branches intact until they reach the height you desire, then trim to this point each winter and if necessary several times a year.

2.Bougainvillias of all sizes and colours will benefit from careful pruning.

Lightly prune young plants to shape but be harder on established mature plants to stop them getting out of control. Trim back all side shoots along each of the main ble  branches to stimulate closely packed flowering shoots.  Cut out the water shoots which tend to have lighter green bark larger leaves and bigger thorns. After pruning check that any ties are not too tight or loose.

3.Oleander require pruning to prevent them getting too tall and leggy. We cut back shrubs to a size and shape suitable for their position in shrub and perennial beds.

A tall hedge that helps hide a house beyond we cut back hard, by a metre or two every two or three years. The other years we merely trim straggly branches and unsightly dead flower ends.

When handling oleander cuttings we ensure we wear gloves as the sap has poisonous properties.

4.Cersis Judas trees need trimming to shape and a size suitable for their situation and the stripping of the numerous seed pods from last year’s Easter flowerings. If you have a large garden with space for more flowing trees Cersis seeds germinate reasonably easily.

5.Roses growing alongside our fruit growing area provided a last good bunch for a new year vase but will today or tomorrow be pruned back to two buds, weeded and mulched wit horse manure. At the same time two garlic segments will be sown close to each stem to help with spring and summer pest control.

6.Grape vine leaves have now fallen so it’s time to prune them to stimulate strong growth buds for the spring. Cut back bushes and standards to three or four eyes/buds on four main branches. If you are training a young plant to grow up the supports of a gazebo or eventually cover it for shade and fruit retain just the strongest branch it reaches the required height and then train young growth each year until the gazebo is covered cutting back side branches to two or three buds each year.

7.Leonotis plants will be cut back to stimulate good displays in the summer and autumn. To maximise the flowering periods we cut back some stems by half and others by eighty percent.

8.Carob trees will be pruned according to their purpose. We have three that will be treated as follows. The most mature important for summer shade will be pruned in the traditional style as a flat topped wide column. A second large tree in a boundary hedge will be trimmed as a thick fan to hide a neighbouring house but retain our mountain views.  A third tree self seeded twenty years ago between two rocks alongside a path. Rather than dig it out we trained it as a half metre round bonsai which remains as an interesting evergreen feature.

Having done these jobs this week we will then steadily through January and February work though the flower garden and fruit trees following our own advice recorded to remind us of best practices in ‘Your Garden in Spain’ and ‘Growing Healthy Fruit in Spain’.