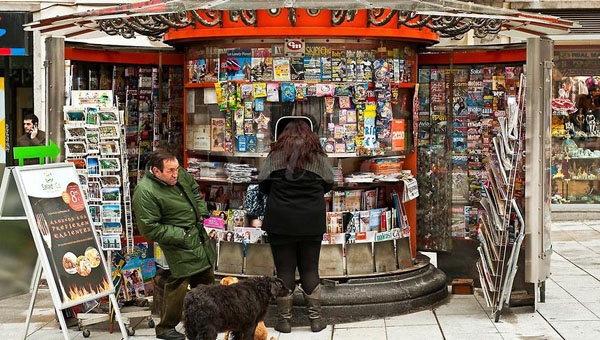 JUST around the corner from my apartment is a newsstand called La Casita de Papel.

During siesta and non-business hours, it is a small austere aluminum box.  Come business hours however La Casita opens up like a flower in full bloom.  It becomes a colorful display of glossy magazines featuring eye-catching photos of movie stars and celebrities.

These periodicals cover a full spectrum of topics from football players to high-tech toys, from pets to motorcycles, from travel destinations to fashion.  There are so many magazines that La Casita has wing-like book racks along its sides that fold back at night.

Also featured are lottery tickets, comic books, paperbacks books and postcards which all add up to a kaleidoscope of full-color display.

By contrast, there seems to be a limited supply of daily newspapers.  Certainly there are few newspapers that are available but they seem to be limited in both number and selection.  Foreign visitors might wonder: Where are the stacks of newspapers?  Why so many magazines and so little newsprint?  Do the Spanish disseminate “news” differently? This is a “newsstand” is it not?

The newspaper readership culture in Spain is quite different from that of other free press democracies.  Newspaper readership in the UK and the US is often associated with “commuting” where readers buy a copy at the start of their journey and deposit it at the end.

Home delivery and monthly subscriptions are still quite popular but these concepts are virtually unknown in Spain.  Spanish newspapers are most likely to be shared at work, home or in a café.  Those few newspapers that do appear (in La Casita’s case; El Pais, El Mundo, ABC) tend to be geared toward “serious journalism” that give a focused coverage to political, economic and international news.

These publications may or may not cover the private lives of politicians or celebrities but will seldom lead with those headlines.

If there is a paucity of newspaper choice in Spain that gap is covered by the magazine industry.  Whereas Spanish daily newspapers fail to cover the equivalent of social diaries or gossip columns, the thriving magazine industry has more than picked up the slack.  The most popular publications devoted to the love lives and gossip of Spain’s rich and famous (for example HOLA and Pronto) sell an amazing two and a half million copies a week.

These publications are collectively known as “prensa de corazon” or press of the heart.  Journalistic historians agree that the immense popularity of this genre is a reaction to the rigors and “colourlessness” of Francoist Spain.  During the forty years of Franco’s rule, the government had complete control of all forms of the media including the press, literature and cinema.

Censorship was omnipresent and dissent was not tolerated. The state was the principal newspaper publisher as all newsprint was placed under control of the government press agency.  The agency’s name, The National Propaganda Agency, left little doubt as to its stated mission.  The press was something other than a for-profit enterprise.

Readership differences may also have to do with the proclivities of those who enter Spanish journalism schools.  Most of Spain’s newsprint journalists are products of just a few official schools.  These schools were deemed ‘official” as a way of controlling what had been a traditionally troublesome profession for any critic of the government.

Journalists must be registered by the government, must be graduates of a recognised journalism school and are pressured to join unions or like minded professional organisations.  An incidental effect of such requirements is that the field tends to be an “echo chamber” for like minded people.

Even though the Constitution of 1978 guaranteed the rights of a free press, there still is a hangover from the Franco era with regard to what gets printed and where.

It should come to anyone paying attention that the newspaper business is in a period of rapid transformation.  The Spanish press is no different; it has just traveled a different path.  With the advent of cable news and corporate ownership newspapers reflect specific political or business interests.

Satellite technology, the internet, on-line versions and the social media are changing the way people disseminate the news.

AMERICAN tabloids or what is known as “red top” journalism in Britain has no counterpart in Spain.  Statistics seem to bear out the fact that newspaper readership in Spain is different.

In 2002 within the UK 62 per cent of adults would read a newspaper on any given day.  In Spain, only 34 per cent picked up any newsprint.

SPAIN has a long and storied press tradition. Its roots are to be found in the 17th and 18th century gazettes.  Political and military news and later the arts and sciences, were circulated in Spain in a public almanac format.

The readership consisted of those few urban dwellers that were literate (less than 20 per cent).  Newspapers continued to proliferate into the 19th century when they reached a zenith of public fascination with journalism.

Newspapers became the heartbeat of the period.  Readers were not only attracted by the general and political news but by articles from the well-known authors of the day. Sometimes these authors defended the restless world of politics while other times were critical of it.

Newspapers took on the role of the public conscience denouncing poverty, illiteracy, public health and making suggestions for improvement of the national economy.  In 1900 there were more than 2,000 circulated newspapers in Spain. Today there are 136 papers in print and the majority of those are non-daily, regional, a niche topic or a foreign language paper such as The Euro Weekly News.