Malaga CF comes home with a draw from the Nou Camp 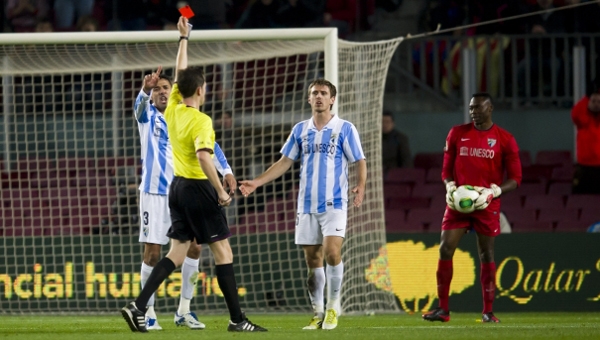 Monreal was given a red card.

Málaga Club de Fútbol drew 2-2 against Fútbol Club Barcelona, in the Copa del Rey first leg quarter final match at the Nou Camp. Iturra opened the scoring for the Blue and Whites in minute 25, however Messi and Puyol were quick to retaliate, putting Barça in the lead by 2-1 in a matter of minutes. Following Monreal being sent off in the 75th minute, the ‘Malaguistas’ were able to equalise with just 10 men, thanks to a goal from Camacho in minute 89. Málaga CF players wore black armbands in memory of former Club Deportivo Málaga President, Antonio Pérez-Gascón Cobos. Messi received his fourth Golden Ball at the Nou Camp tonight.

Following last Sunday’s League clash between Málaga Club de Fútbol and Fútbol Club Barcelona, the two sides met again tonight at the Nou Camp for the Copa del Rey first leg quarter final match.  The ‘Malaguistas’ were quick in their attempt to take the reigns of the game early on, but the locals soon began to create several goal opportunities.

Thiago had the first shot at goal for Barça, but couldn’t penetrate Weligton’s defence.  Alexis had another two chances to score, but the Chilean-born player was unable to find the goal.  However, luck was on the side of the Blue and Whites, as Iturra took advantage of a pass to Thiago to put the visitors on the scoreboard.  However their joy was short-lived as only minutes later, Messi scored for Barça, and Puyol found the net following a corner kick, to put the home side in the lead by 2-1 at half-time.  Buonanotte had a chance to equalise before the half-time whistle, but the ball went over the crossbar.

Málaga Club de Fútbol coach, Manuel Pellegrini, decided to introduce Monreal to substitute Eliseu on the defence.  The visitors appeared to be more relaxed on the pitch in the second half, as FC Barcelona didn’t seem to have the same ‘freshness’ about their game play as before.  Santa Cruz and Duda were brought on to the pitch as the ‘Malaguistas’ tried to find the equaliser.  Eliseu put Pinto to the test with a powerful shot from just outside the penalty area, as well as Seba who also had a promising shot at goal.

Monreal was sent off 15 minutes before the final whistle, which made things more difficult for Málaga CF.  During a tackle, Monreal brought down Messi just as he was about to face Kameni.  Despite having only 10 men, Málaga were determined to get another goal, and their prayers were answered in minute 89 with a goal from Camacho, following a Duda free kick.