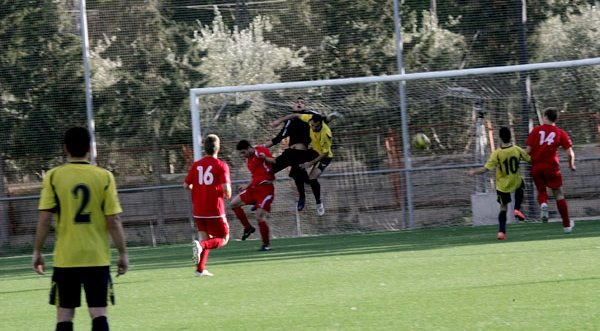 HARD EARNED: Ten man Mazarron had to dig deep to hold out for a draw.

MAZARRON had to battle for 40 minutes of the second half with ten men after Alfonso was controversially sent off in the 50th minute.

But an impressive defensive display earned the players a 1-1 draw.

In truth it was a below par performance but Mazarron were not helped by the antics of some Beniajan players and the inadequacy of the match officials who were intimidated throughout the game by the home players and supporters.

Mazarron got off to the perfect start when they took the lead after just six minutes. Cecilio’s through ball found Ruben racing clear and his clever lob eluded the Beniajan keeper and nestled in the corner of the net.

Ruben was booked two minutes later following a challenge with the Beniajan left back who fell to the ground as though pole axed.

After 15 minutes Ruben broke clear again but this time his lob was cleared off the line.  Beniajan came more into the game and Jose Iker had to be alert to tip a free kick over the bar. Then a cross from the left wing deceived Iker and Matt Clarke did well to clear the ball off the line.

Beniajan equalised three minutes after half time when the Mazarron defence failed to clear and the ball was stabbed home to make it 1-1.  Then two minutes later came another unsavoury incident, again involving the Beniajan left back who fell to the ground again as Alfonso ran past him.  The linesman, who had been intimidated by the home supporters behind him in the first half when a plastic bottle had been thrown at him, reacted to their appeals and called the referee over.  Alfonso was shown a red card much to the amazement and disgust of the Mazarron supporters.

Despite being down to ten men, Mazarron’s defence, marshalled superbly by Diego, held firm with Jose Iker making a number of good saves including a tremendous double save in the 84th minute.

Mazarron were restricted to long range efforts but could have clinched it in the dying minutes when first a Ruben header was cleared off the line, and then a free kick from Baeza on the right just evaded desperate lunges from Barrachina and Diego at the far post.