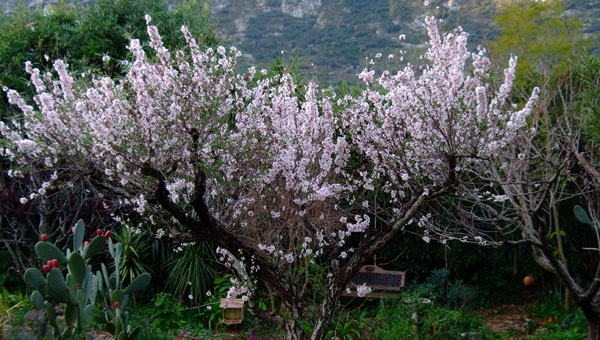 ALMOND blossom is now out or about to open in many areas, while others will follow within the next four to six weeks.

It really is one of the nicest times of the year and one year we were able to follow the blossom from Andalucia to Aragon over a period of two months.  But when exactly trees bloom is very dependent on a garden’s microclimate.

The tree in the photograph is in our own garden.  It’s in full bloom as you see but I walked just 300 metres and down 50 metres to friends for lunch today and none of the four trees in their garden showed a single flower bud or leaf bud opening.

The only real difference is that our tree is just inside a high hedge sheltered from the recent cold winds, while the trees in the other garden are in the open and exposed.  Hopefully we don’t get bad weather to knock off the blossom and emergent fruit during February.  Amazingly we lost few flowers this last week when we experienced 80 kilometre an hour gusts of wind.

However a few cold days would help kill off various early pests flitting around the fruit trees.  We will do an early neem and propolis spay tomorrow for safety. Interestingly we first discovered neem oil nearly 20 years ago sitting next to an ecological orange farmer at a Spanish walking club dinner.  Neem oil is totally ecological being pressed from the fruit of the neem tree Azedarach aiandica

For the first few years we purchased our oil from Germany until we found suppliers in Spain.  We said interestingly earlier, for last Friday Dick visited another eco-orange grower with a Friends of Avinenca group who rarely sprayed with anything.

Twenty years ago he had taken over a poorly maintained grove that had been sprayed with chemical sprays.  Since then he had increased the number of varieties of oranges and mandarins to 10, allowed the grass and herbs to grow, only sprayed with a paraffin oil once a year and did little pruning except to keep a reasonable shape.  Incidentally his trees ranged from a couple of years old to 120.

If you want to cut back the size of the lawn you could plant orange trees and just leave the grass and weeds to grow to create a living mulch to reduce evaporation water losses.  Just cut once or twice a year to allow the grass to decay and add fertiliser to the soil.   His use of a paraffin oil was on the basis of cost and of course paraffin from coal or oil, although from nature, is not in our book really ecological.

The farmer agreed but said that it was allowed by those who drew up the regulations for organic food certification.

He did not spray against the minero pest and so had some untidy branches but not the infestation of surrounding mono variety chemical driven orange groves who did need to spray.

Our view for gardens is that we like to look at healthy tidy trees and bushes so we should prune out minero damaged growth and spray with neem and propolis against insect and fungal pests.  We have seen whole branches of citrus trees killed by long term damage from continuous minero attacks.  The farm in fact was on light sandy soil so would not expect many fungal problems. Attacks of mealy bugs and sooty leaves in our garden are often stimulated by the high humidity levels caused by over watering and close plantings.

Incidentally the harvests per tree in the organic orange grove were less than surrounding chemically fertilised and pest treated orchards,  but his costs were lower so he made as much profit or more per tree or henegada which is a twelfth of a hectare and an old Roman measure.

Lastly if you are growing any sort of fruits a copy of ‘Growing healthy fruit in Spain’ will soon pay for itself.