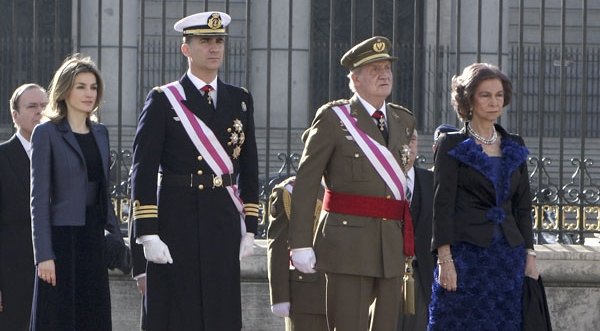 IN the absence of my favourite soap operas from back home, I was a tad concerned how I would get my daily drama fix here in Spain.

As it turns out, I needn’t have worried; the Spanish royal family is providing so many twists and turns, it could give Coronation Street a run for its money.  Or Dynasty, perhaps more appropriately.

King Juan Carlos had a veritable Annus Horribilis in 2012; not only did he end up on the operating table for a fourth time within the last couple of years, but he also plummeted in the popularity stakes to an all-time low, according to a survey.

Everyone loves Queenie back in the UK and the two Princes are generally adored, despite indiscretions in Vegas.  Not to mention the national joy surrounding the expected first child of the Duke and Duchess of Cambridge in July.

The same doesn’t seem to apply here. The locals explain that this is down to the King of Spain preferring to shoot live elephants on costly trips to Botswana rather than clay pigeons in his back yard, at a time when his country was, and remains, in the grips of one of the worst economic crisis of recent times.

Nor is there any evidence of lovable Corgis or other pets to soften the image; an important gauge in how nice a person is, according to my daughter at least.

The press suggest that even his wife feels the same way, not having shared the matrimonial bed for decades following his alleged affair at an early stage in their marriage.

Their golden wedding anniversary passed without celebration last year. Then there were the fraud charges against his son-in-law, Iñaki Urdangarín, which have left question marks over the future of the monarchy.

The Sunday Times recently reported that an ‘atomic bomb’ email was about to drop relating to the King of Spain, so I guess the drama will continue in 2013.  Needless to say, I have the popcorn on standby.

Having always lived in monarchies, I am quite fond of a bit of blue blood.  At their best they are not only a tourist attraction, but should also set moral standards for the people and provide a focal point pride in your country.  A funnel for unity and non-political leadership.

Now that they are in essence figure-heads rather than leaders, in the Western world at least, the monarchy needs to provide a bit of value in return for the tax payers’ money.  More so than just keeping the gossip magazines in business.

King Juan Carlos still enjoys the indisputable credit of his role in the successful transition of Spain from a dictatorship to a democracy.  That includes the resolution of an attempted coup by the pro-Franco fundamentalists in 1981, albeit having been handpicked by General Francisco Franco himself as the next head of state in 1969. Pro-monarchists argue that the establishment will take on renewed importance in the event of further integration of the EU, as each country will attempt to maintain its national identity within the greater whole.

But the future of the EU seems far from certain as member countries continue to diverge in both fiscal and social policies in an attempt to survive the economic storm.

So, while this real-life soap is amply providing intrigue and drama, how far will the Spanish monarch’s subjects go For King and Country?  Or more importantly, what will he do for them?