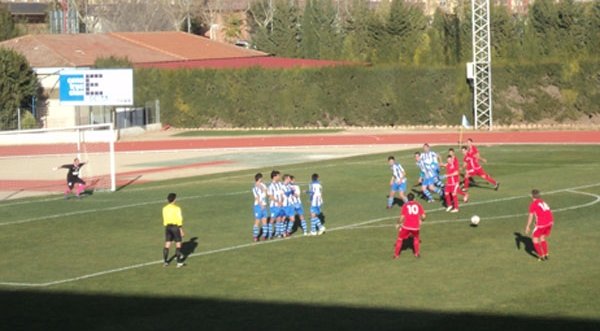 MAZARRON will be hoping to bounce back against Corvera at home this Sunday, kick off 4.30 pm, after a heavy defeat.

The club’s unbeaten run came to an end with a 5-2 loss at second placed Jumilla. Mazarron were without top scorer Jose Ruben and Alfonso, both through suspension, but started the game in lively fashion with Barrachina enjoying his new role as an attacking right winger.  On 22 minutes a lovely ball from the hard working Cecilio found Barrachina clear on the right and he ran on before hammering the ball into the corner of the net to give Mazarron a well deserved lead.

Ten minutes later Cecilio won the ball outside the Jumilla penalty area and this time found Panocha on the left and the young winger coolly slid the ball under the Jumilla keeper’s legs for what should have been Mazarron’s second goal.  Controversially the referee awarded a free kick for a foul by Cecilio when he had clearly won the ball fairly.

Then three minutes before half time Cecilio was put clear by Santi and was brought crashing to the ground by the last defender.  Instead of awarding a free kick which would have meant an automatic red card for the Jumilla defender, the referee waved play on.  Jumilla cleared the ball straight down to the other end of the field and from the resulting cross Navarro out jumped Pollo to head the ball over Jose Iker and level the scores at half time.

Jumilla took the lead eight minutes into the second half when Pollo was again found wanting defensively and the left winger squared the ball across the goal for an easy tap in.  Jumilla were then reduced to ten men when one of their defenders was dismissed following a second booking.

Cecilio shot over the bar from a good position and a clever free kick from Panocha deceived everyone with Diego just failing to make contact at the far post.  However, Jumilla virtually settled the game after 76 minutes with two goals in rapid succession, the second of which was clearly offside. In between the two goals captain Diego, once again Mazarron’s best player, was inexplicably substituted much to the disgust of the Mazarron supporters.

Mazarron still created chances and with ten minutes left, Santi’s cross was hammered against the post by Cecilio and then Santi broke clear and rounded the keeper only to try to pass inside to Cecilio with an empty net in front of him and the ball was cleared.

Jumilla made it 5-1 in the 89th minute and substitute Perico scored a consolation goal for Mazarron on his debut in injury time.