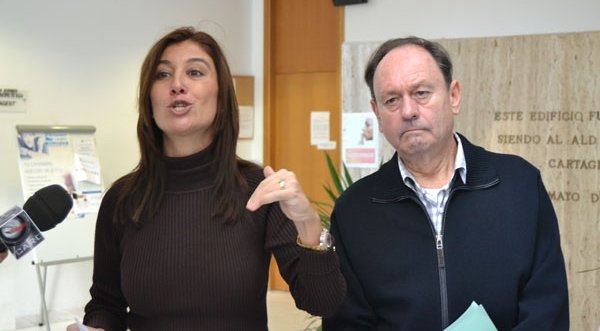 IT was a war of words on the Orihuela Costa as Councillor for the Coast, Pedro Mancebo, responded to allegations made by opposition parties CLARO and the PP.

Bob Houliston and former Mayor Monica Lorente denounced the “deliberate neglect of Orihuela Costa and the systematic running down of services offered in the Playa Flamenca office of the Town Hall.” Together, they made a series of accusations, all of which have been denied by the Government team.

Bob Houliston said, “Deliberate neglect of the coast was clearly illustrated in the breaking of the formal promise by the Mayor that 40 per cent of the proceeds of the sale of municipal land in Orihuela Costa would be devoted to investments on the coast. This has not happened.”

In response to this, Pedro Mancebo said that the government team has announced publicly that around €400,000, which is 40 per cent of the sale of land, will be used for projects on the coast.  He said: “To state that land has been sold to enable more houses to be built is foolish.  My government does not sell land to build houses, we sell the land to get the money which is needed to develop public investments.  The last thing Orihuela Costa needs is new houses.”  He added that there are no plans to sell protected land in the Sierra Escalona as claimed by CLARO and the PP

In response to allegations that €705,000 of funds has been transferred from the Orihuela Costa to other areas, the Mancebo denied this. “Juan Ignacio Lopez-Bas, Councillor for Commerce and Taxes and myself must sign such documents for transfer of monies. Both of us have not signed any such transfer.”

Bob Houliston and Monica Lorente gave special importance to what they said could be a potentially serious matter in relation to the appointment of a Co-ordinator to the Councillor for the Coast.

They showed documents listing the appointment at an annual salary of €33,000 but said this person has never been seen working.  Mancebo admitted he did make the appointment with this salary, as is allowed, but at the last minute the post was not taken up.  A new person is to start shortly on a lower salary.  “No public salary whatsoever has been paid to anyone who has not worked for the Town Hall.”

The opposition councillors went on to comment about the lack of facilities within the Playa Flamenca Town Hall and the closure of the National Police office, the Aguagest, Chamber of Commerce and tourism office.  Mancebo said they were working on re-instating the National Police office and admitted the tourism office had not been manned continually in recent weeks but said the Chamber of Commerce office was indeed open as was the Aguagest base.