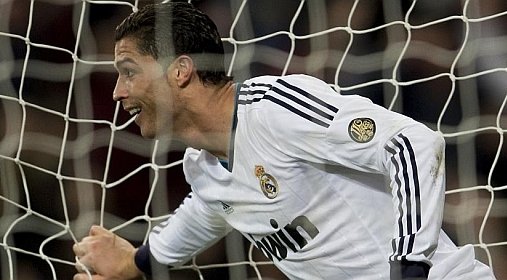 Real Madrid warmed up for the upcoming crunch match against Manchester United in perfect fashion by cruising to victory over a sorry Sevilla side in front of the Bernabéu faithful. Though ‘Los Blancos’ remain 13 points off the top of the league with Barça yet to play this weekend, the result should put them in buoyant spirits ahead of their all-important European clash midweek.

After Benzema broke the deadlock in the 17th minute, Cristiano Ronaldo stole the show with a hat-trick (after 26, 46 and 58 minutes), with Sevilla notching a late consolation goal to make it 4-1.

Ronaldo now has 24 goals in the league this season and, even more significantly, has surpassed Gento as Real Madrid’s sixth-highest all-time top goalscorer, with 183 goals. What’s more, his 20th hat-trick for the club moved him into second place on this front, ahead of Puskas, behind only Di Stéfano, who is way out in front with 31. Sir Alex Ferguson’s United will have watched on with interest as CR7 put on a total masterclass against the Andalusians.

Benzema, meanwhile, ended up a 262-minute league drought with his goal, which was his first strike in ‘La Liga’ since 6th January. His rival for the striking spot, Higuaín, did not enjoy the same luck, being sent for an early bath after picking up two yellow cards.

Playing in the morning obviously suits Barça, who had swallowed Getafe whole by lunchtime. Barcelona was in great form to welcome in the Chinese New Year – a great match and a goalfest against opponents who must have felt they were up against a dragon.

Scoring opened in the 6th minute when Alexis Sánchez got rid of the weight round his neck by hitting his first goal in the Spanish league this season, latching onto a superb diagonal pass from Iniesta and beating Codina. His joy at scoring just went to show how much his goal drought had been bothering him.

By his side was Messi, as always, and in the 13th minute he hit the back of the net following a move involving Iniesta and Thiago, and it was a miracle that the scoreline did not change again in the first half.

The finest left-sided defender in the world, Jordi Alba, gifted Villa the next goal to make it 3-0, in the 58th minute, with a terrific pass. The Asturian was someone else who needed a goal, and slotted the ball beneath Codina’s legs.

With the final score no longer in doubt, Alexis Sánchez went off to a tremendous ovation, and Tello came on in the 73rd minute. Within less than five minutes, the youngster bagged Barcelona’s fourth goal, with Messi again involved.

Getafe got the goal that looked as though it would take some of the sting out of the final result in the 83rd minute, when Jordi Alba made a mistake when heading clear and Álvaro Vázquez took full advantage. This goal seemed to irk Barcelona, who kept up the pressure right to the end. Iniesta got the goal his display deserved in the 90th minute, before Piqué got in on the act to make it 6-1 from a Thiago pass.

Isco doubles up in Málaga win

Málaga stole the spoils at the Ciutat de Valencia stadium after an Isco brace, one from the penalty spot, turned the match on its head.

The win over Levante strengthened the Andalusians’ hold on fourth place, putting them two points ahead of their closest challengers, Valencia. The hosts, meanwhile, fell to their second straight defeat.

The home side dominated proceedings in the opening period, creating a raft of chances, with only some inspired keeping from Málaga netminder Willy Caballero keeping the scores down.

Levante moved ahead after 26 minutes, Barkero blasting home from the penalty spot after Demichelis felled Martins. However, just ten minutes later and the visitors equalised through a spot-kick of their own, Baptista making a meal of a push in the box. Isco duly converted Málaga’s only shot of the half to make it honours even at the break.

Pellegrini’s men hit the ground running after the restart, with Isco completing the comeback after 47 minutes. Fed by Toulalan on the edge of the box, the playmaker doubled his and his team’s tally on the night, hitting a low strike right into the bottom corner.

Though they huffed and puffed in pursuit of an equaliser, the hosts lacked the necessary composure to trouble Málaga, with Juanlu’s miscued header from El Zhar’s cross one of the few clear openings they created. Isco, meanwhile, could have had a hat-trick, only for his venomous left-footed strike to be deflected off target from close range.

Manzano’s return gets Mallorca a point Mallorca managed to rescue a point thanks to Geromel’s injury-time header. Osasuna came close to spoiling Manzano’s homecoming party to the Mallorca’s dugout, but Mendilibar’s men let victory slip through their fingers with a last-minute defensive mistake.

Mallorca controlled the game, but Osasuna was extremely effective. The visitors managed to win just two corners – whilst the hosts won twelve – and they scored from both of them. However, only one goal was given. The referee disallowed Ruben’s goal in the 16th minute for a non-existent foul on Aouate. The Mallorca keeper mis-timed coming off his line and arrived late for the ball.

Mallorca could have gone in ahead at the break, but for Giovani’s appalling finish one on one with Andrés Fernández in the Osasuna goal. Apart from those two chances, the game was a boring affair.

After the break, Mallorca continued to take the game to an Osasuna side that took few risks until Lolo scored against the run of play in the 77th minute. Cejudo played in a corner kick and Lolo got in behind the Mallorca defence to head home.

It wasn’t looking good for Manzano’s return to Palma, but Geromel rescued a priceless point in Mallorca’s battle to climb out of the relegation zone. A desperate long ball from Aouate ended in the back of the net after the Osasuna defence allowed the ball to bounce and Geromel beat Andrés Fernández to the ball, heading home the equaliser. A last-gasped goal that gifted Mallorca a valuable point, although it could indeed have been all three had Giovani’s late goal not been ruled off-side.