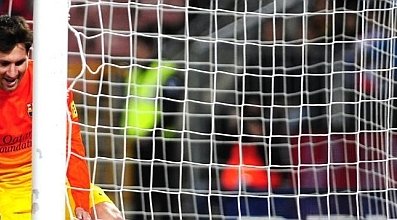 AGONISING WIN FOR BARÇA THANKS TO ARGENTINE’S BRACE

Leo Messi’s goal in the 73rd minute, converted from a free-kick, gave Barça three golden points against a tough Granada that led with an early goal from Ighalo (26′). Messi made it 1-1 in the 50th minute, before going on to notch the winner. These two goals take the prolific Argentine’s tally to 300 with Barça.

This Saturday the ‘Blaugranas’ ended their two-game run without an away win. With Xavi injured and Iniesta rested –it was the coach’s decision to leave the latter on the bench, though he did play the last twenty minutes– Barça struggled to break down the opposition defence in the first half, despite creating plenty of opportunities. But the Catalan club managed to turn the match around in the second period, despite hardly seeing the rival goalposts.

Ighalo gave Granada the lead. In the second half, Messi was on hand to make it 1-1 when Toño parried Fàbregas’ strike, before sealing all three points for Barça with a free-kick with 17 minutes to go.

With this win Barça increases its lead at the top of the table. Granada, meanwhile, is still six points above the relegation zone, despite its defeat.

Valdés proved the hero of the day for Barça in the action-packed final minutes of the game, stopping headers by El Arabi and Iñigo López and parrying a shot from Brahimi into the side netting with the Frenchman clean through on goal.

GOALS FROM MORATA AND RAMOS, WHO WAS SENT OFF IN THE 17TH MINUTE Real Madrid eased to a 2-0 win over Rayo Vallecano through early goals from Álvaro Morata and Sergio Ramos. The defender was subsequently sent off for two bookings in as many minutes, one in the 17th minute for pushing Baptistao and one for blocking a cross with his hand a minute later.

A rejigged Real line-up – the product of injuries, suspensions and Mou’s tinkering – came racing out of the blocks and seemed to have put the game to bed in the opening quarter of an hour. Having started ahead of Karim Benzema, Morata repaid the coach’s faith with a goal just a couple of minutes in.

With Rayo firmly under the cosh, Sergio Ramos doubled the lead with a header after 12 minutes, but it all changed when the captain was sent for an early bath. The red-carded defender took Morata down with him, the youngster being subbed off in the 18th minute as Raúl Albiol came on to plug the gap in defence.

Rayo dictated proceedings against ten men and managed to create a fair amount of danger in what remained of the first period. ‘Los Blancos’ weathered the storm after the interval, however, and eventually cruised to victory in front of their home fans.

PLAYING BADLY, DOWN TO TEN MEN, BOOED BY SUPPORTERS (2-0)

Mestalla is a tough stadium for both the opponents and its team. Valencia beat Mallorca (2-0) despite being the worse team of the two, being one man down and being whistled by its supporters.

In the first half, Valencia had to overcome the exacting Pérez Lasa, the referee with his hand poised over his card pocket, along with Mallorca’s outstanding organisation, deserving of a better result and, lastly, impatience from the terraces which, in the end, rallied to acknowledge the efforts of their team.

The sending off of Tino Costa (minute 27) came just after a foul without the ball on Pina. Mallorca already had control of the game by that point down to its extraordinary defensive organisation and the brilliance of an irrepressible Giovani. Goyo Manzano’s side even took advantage of the closing minutes of the first half to turn it into a ‘rondo’ (pig in the middle) but missed out on the opportunity to take the lead.

The principle reason the Valencian goal finished with a clean sheet was Diego Alves. The Brazilian player was awe-inspiring. Mallorca flagged in the second half. It missed Giovani’s leadership and opportunities for Hemed, Luna and Martí missed the mark before Victor Ruiz put the locals one up with a header off a corner (minute 59).

Manzano took a gamble on putting three at the back and adding another player in attack to try to turn the result around. A last desperate push into the enemy zone only got them a sensational counterattack from Dani Parejo which Soldado finished off, making it 2-0 (minute 81). Manuel Pellegrini has become an integral part of what will be next summer’s grand waltz of football managers. Chelsea, waiting for Mourinho to make his move, and Manchester City, are two teams that have made the first moves toward signing the Málaga manager.

Txiki Begiristain, director of football for sheik Sulaiman al Fahim’s club, and a great admirer of Pellegrini’s work since the Chilean was in the Villarreal dugout, has already held the first tentative talks with the manager. Nobody in Manchester can really see Roberto Mancini, despite his long contract, making it into the following season. This season’s run of nothingness will surely send the Italian packing. If the club is successful in showing him the door, then Pellegrini will be the next man in line for the job. Begiristain sees him as the man that can put City definitively on the European map.

City is not the only European club with its eyes on the manager, however. Roma has had various talks with him, and has even gone so far as to put a job offer over the table. Jesús Martínez, the manager’s agent, has said as much: “We had a formal offer, but we turned it down flat. It was less than 15 days ago, but we rejected it because it’s mid-season,” he said. The agent went further still, claiming, “Chelsea and other clubs have contacted us, but through intermediaries, nothing official. Manuel would love to coach in the Premier League, but also in Germany, Italy and other major championships.”