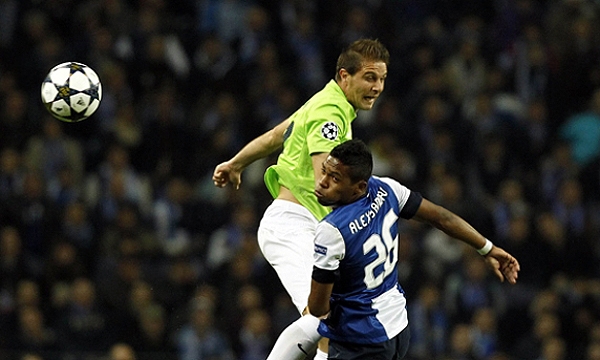 FC Porto won the first leg of the UEFA Champions League last 16 clash by 1-0. The Portuguese-based side, who won following a goal by Moutinho, knew how to play Manuel Pellegrini’s team, and kept the pressure on the ‘Malaguistas’ throughout the entire match.

Porto kicked off the match determined to take advantage of the support from their fans, despite the Do Dragao Stadium not having a capacity crowd.  The opening minutes highlighted the local side’s hunger to get on the score board at their home ground, with a powerful shot by Izmailov after five minutes.

The ‘Malaguistas’, tonight wearing the third kit, green shirt with white shorts and socks, focused on the attack, but kept coming up against a strong Portuguese defence.  Victor Pereira’s team kept the pressure on the visitors at the Do Dragao for the entire game, impeding Málaga’s usual style of play.

It was clear that Manuel Pellegrini’s team couldn’t take control of the match during the first 15 minutes of play.  Porto’s Otamendi had a chance to open the scoring following a corner, but the ball went way over the crossbar.  Just two minutes later, and again following a corner kick, Varela had a near miss, much to the astonishment of Willy Caballero.  During the worst point of the game for the ‘Malaguistas’, Antunes lost possession of the ball to Varela, following promising play on the left wing.


The Blue and Whites stopped the Portuguese-based side controlling the match, and a shot by Danilo from outside the penalty area didn’t cause any trouble for Willy.  However Porto continued to show their capability of taking the initiative against Málaga CF who at times appeared quite limited on the pitch.

It wasn’t until minute 50 when the visitors came close to a goal.  A pass from Isco and a shot from Sergio Sánchez resulted in a corner kick.  Porto were full of ambition in the second half, and in minute 52 Ismailov took advantage of a great pass from the left wing to cross the ball from Caballero’s penalty area, narrowly missing the goal line.

The locals were circling around the Málaga goal area, but it was Moutinho who opened the scoring for Porto, putting them in the lead by 1-0.  However the goal looked as though it could have been offside.

Following this goal, Pellegrini’s side were forced to step up their attack, but faced some particularly tough moments in the match.  After Portillo was brought on to the pitch, Pellegrini made a double substitution for the last stage of the game, which saw the introduction of Lucas Piazon and Camacho.

Málaga CF did manage to get closer to the penalty area during the final part of the match, but didn’t cause any real danger for the local keeper.  However, despite the result, the qualifier is left wide open, and will be decided at La Rosaleda on 13th March, which Málaga will have to win in order to make it to the quarter finals.

INFORMATION:  UEFA Champions League last 16 first leg match, held at the Do Dragao Stadium, in front of 40,000 fans.  The return leg will be held at La Rosaleda on 13th March.