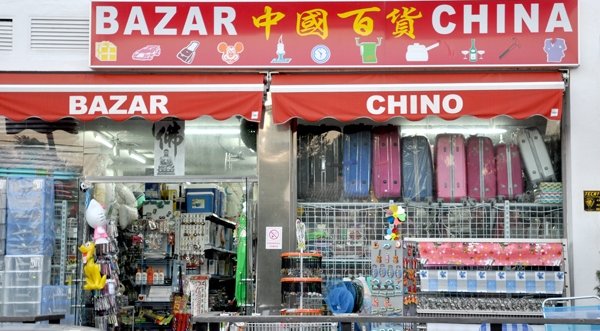 TAKING OVER: Swarms of Chinese businesses are taking over

When Old Mother Shipton reputedly issued this stern warning umpteen hundreds of years ago, she probably envisaged a race of people coming across the Euphrates waving weapons of war, not brandishing bundles of banknotes.

For some utterly complicated reason, the Spanish government has allegedly allowed the Chinese to trade in the country tax free. It apppears it is something about Hong Kong no longer being a tax haven for Latin American countries!
Well, I suggest you take a look around; they are now everywhere.
Their multi stocked supermarkets, which are supplied exclusively from China and are in some cases a total monopoly, sell just about everything from knitting needles to knee pads and everything in between.
Because many of their materials used in their manufacturing are utterly inferior to those used by the factories of the Western hemispheres, plus the fact their labourers work for a pittance and they have special tax liabilities, they are able to undercut local businesses to a point where Spanish retailers are going into liquidation – or being threatened – in droves.

Due to the fact they sell a multitude of ironmongery items local ferreterias are going under. Their extensive lines of books and writing materials are leading to the closure of a whole host of stationary stores. Small Spanish haberdashery and shoe shops are being forced out of business right left and centre .  These Chinese entrepreneurs are also now moving into other areas.

A couple of nights ago I visited a large restaurant cabaret establishment in Tenerife.  The last time I was there it was Spanish owned.

I tell you something there is something incongruous about a place packed with British tourists all singing along to an Elvis tribute with a Chinese floor manager on duty and another operating the till!

Now I have nothing against free enterprise. What I simply am unable to understand is why, if these tax breaks occur, there hasn’t been some form of outcry from local business people? This odd silence also extends to the Spanish government.
Surely its citizens are entitled to some explanation as to why they have allegedly waived tax responsibilities for these Asian business people?

I think something smells somewhere.

No responsible government would allow a whole race of foreigners the means to undercut and put thousands of its own local business people out of their places of employment, for no apparent reason whatsoever.

No, there’s summat up and I for one think local business people deserve some explanation for what appears to be taking place in their country.
Personally I’m intrigued.
Has anyone out there any idea of what is going on and can put it all into laymen’s terms?
I’m all ears.

For all of you jealous of the Tenerife weather. We have now been in the grip of a howling storm for two days! Feeling a little better!?