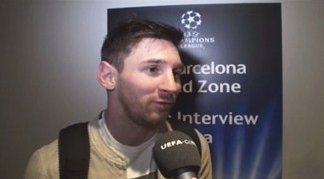 A UEFA Champions League performance full of confidence, brio and delightful goals put an end to FC Barcelona’s recent travails – a sight which delighted their fans and Jordi Roura’s players. “Everything came off perfectly,” as far as Lionel Messi was concerned.

Messi’s early strike put him ahead of Ruud van Nistelrooy in the all-time UEFA Champions League scoring charts and left him with only Raúl González to catch. Messi’s second, a clever David Villa goal and an added-time effort from Jordi Alba completed a 4-0 win against AC Milan to cancel out a 2-0 first-leg deficit. As Messi and Villa told UEFA.com, when Barça play at this pace, few can stop them.

Lionel Messi, Barcelona forward
We needed a night like that not only to get through, but to erase that result in Milan. Everything came off perfectly. I think our fans knew just how we were going to respond and we, the players, knew the crucial thing was to re-establish our way of playing. We did it. From the fifth minute when we got that important first goal, we just went after Milan in every way. We wanted that opening goal as soon as possible to cut the deficit and to make the fans feel it was going to happen. It was lightning quick movement of the ball to get it to me and, happily, I put it away. That’s why we celebrated with such joy.

This is the kind of performance we’ve been producing for years. Perhaps in the last few matches we’ve lost a little of our form. We knew, however, that to go through all we really needed was to get back to being ourselves. We envisaged what kind of performance this needed to be and how to produce it. This is the Barça that we and our fans want to see every game.

The fact these goals took me into the top two of all-time UEFA Champions League goalscorers is really beautiful. It’s an achievement to be in second place already, but the really important thing is that Barcelona are in the quarter-finals because that’s all we wanted to achieve tonight.

David Villa, Barcelona forward
These are beautiful, magical moments. It’s just what all of us around the club needed after some difficult weeks. This is the result we required – we stay in this competition which matters so much to us and we’ve defeated an important rival.

The fans were a ten out of ten, again, like always. This gives us massive motivation. Ever since the 2-0 defeat in Milan everybody has been behind us. Instead of criticising or trying to analyse the defeat in negative terms they have shown total confidence in us and we felt their backing. It helps.

Wembley? Well, that would be great but it’s genuinely time to keep our feet planted firmly on the ground. It’s a complicated task to win this tournament – days like this are only once in every few years. Now it just feels great to be in Friday’s draw. Let’s see who awaits us.

by Graham Hunter from Camp Nou