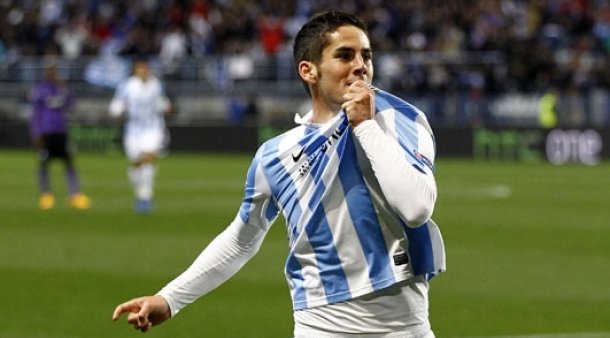 Malaga FC continues to write their name in the history books in their first season in the UEFA Champions League. Manuel Pellegrini’s men defied the odds and came from 1-0 down in the first leg, to defeating FC Porto by 2-1 on aggregate, with goals from Isco and Santa Cruz. Málaga are now amongst the eight best teams in Europe, and will find out their quarter-final rival in the draw on Friday.

Málaga started the match with a very committed performance, but found themselves up against a well-positioned Porto.  Victor Pereira’s men had the first shot at goal within the first 10 minutes from Danilo, who sent the ball over the crossbar.  A pass to Joaquín, who was alone in front of Helton in the previous game play, was too high for Málaga’s number ‘7’ to control.

The Blue and Whites’ first opportunity to score came from a set piece, setting up a header for Baptista, who failed to find the goal.  Both teams began to pile on the pressure from this point on, although neither caused any real danger in the penalty area.  A chance came for Defour in the 26th minute, but the ball went way over Willy’s goal.  Just six minutes later Joaquín had another shot at glory from the right of the goal, but again the ball was sent way over the crossbar.

Málaga’s best chance to get on the score board lay at the feet of Antunes in minute 35 with a powerful shot from outside the six-yard box, following a Joaquín corner-kick.  The Porto keeper forced another corner, this time a promising header from Toulalan looked set to make the grade, but proved little worry for Helton.

A shot by Julio Baptista in minute 39 led to a disallowed goal for the Blue and Whites.  The Porto keeper committed a foul on Baptista, which led to Saviola sinking the ball into the back of the net.  However the referee understood the foul was Baptista’s fault and the Blue and Whites’ goal was disallowed.  An impressive display by Joaquín and Isco led to the goal, but Málaga’s hopes were dashed seconds later.

However it wasn’t long before the local fans had something to smile about.  Isco took control of the ball from Gámez, and after passing to Iturra, Isco regained possession and slammed the ball into the back of the net from the right of the penalty area.  In minute 43, Málaga were 1-0 up (1-1 on aggregate).

The half-time whistle came just at the right time for the Blue and Whites, who went into the locker room with a level score board.

Minutes into the second half and FC Porto were left with 10 men as Defour was shown a red card for a foul on Joaquín on the right wing.  Victor Pereira was forced to make a change as a result, and moved Alex Sandro on to the wing in place of Defour.

Málaga’s combinative play stepped up a gear after the sending off, with the players fully aware that any mistakes leading to a Porto goal could be disastrous.  Another close call for Saviola in the 57th minute resulted in a corner, leading to a near miss for Isco.  The Benalmádena-born player had yet another chance four minutes later, but he sent the ball out of play.

Porto began to show new signs of life in minute 74 with a shot from Jackson, but under the watchful eye of Willy Caballero, the ball went out.  This was the first real opportunity for the visitors during this part of the match, as Manuel Pellegrini’s men completely dominated the game.  Two minutes later and Roque Santa Cruz, who had only just joined the match, tipped the balance in Málaga’s favour with a fantastic header into goal from an Isco corner.  The Blue and Whites’ superiority on the pitch was now reflected on the score board.

However Porto weren’t about to give up, and a header into the back of the net by Maicon in minute 80 looked to even things up, but the goal was disallowed for being offside.

In the last few minutes of play, a desperate Porto began to see why Málaga were the superior team tonight, helped along by the incredible support from the fans and the electric atmosphere throughout La Rosaleda.  Málaga CF, who are now one of the eight best teams on the continent, will find out their rival in the quarter-finals when the draw takes place on Friday.

INFORMATION:  Last-16 second leg UEFA Champions League match, held at La Rosaleda in front of 27,451 fans.  Málaga have qualified to the quarter-finals having won 2-1 on aggregate.