Cooking by the Jamie book 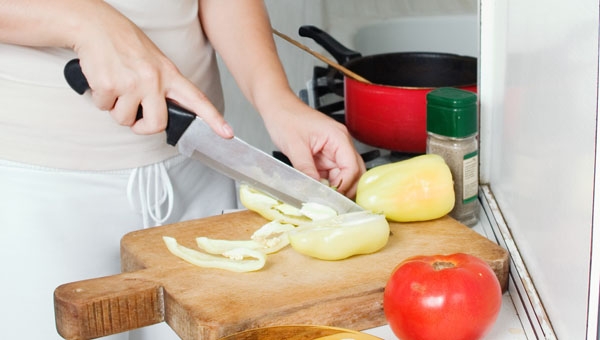 KITCHEN GODDESS: That I am not

Life is too short to grate carrots, a friend once told me and I would tend to agree. It is not an entirely joyful task and, if you’re as clumsy as I am, you will probably end up grating some of your knuckles, too. In fact, the less time I have to spend in the kitchen the better – and safer. The only problem with this is that I do like to eat good, healthy food and my resources do not stretch to employing a cook.

So finding out that Jamie Oliver, celebrity chef and patron saint of school lunches, had written a book called 15 Minute Meals was a veritable ‘Eureka’ moment. Admittedly, I was a little sceptical since I can barely lay the table in 15 minutes, but who was I to argue with the Guru of Gastronomy.

Said book in hand, sleeves rolled up but apron sidestepped (since tying the knot at the back would eat into the all-important cooking time), I was ready to undertake my first recipe: ‘Golden Chicken, braised greens and potato gratin’. The first line of instructions read – finely slice the potatoes in the processor. Doh! Failed at the first hurdle. My kitchen is fairly antiquated – I barely use a blender let alone own a food processor. Still, I persevered. The family and some relatives were gathered and the anticipation was palpable.

Twenty minutes later I was still slicing and chopping, the kids complaining of rumbling tummies and I hadn’t even laid the table. Maybe Jamie recommends that everyone tucks into the pots and pans directly armed merely with a fork? Communal dining, if you will.

A further 10 minutes later, I had ‘flattened’ the chicken with a rolling pin as instructed, fried, drained, poured and grilled various elements of the meal. Oh, and wilted the spinach, something I can relate to since I was feeling a bit wilted myself at this stage.

Some 40 minutes later, we finally sat down to what is in essence a pretty decent meal. A guest assures me that he has witnessed the man himself complete a recipe from the book in the allocated 15 minutes, which doesn’t make me feel a whole lot better about my cooking prowess. Still, I am secretly pleased that I didn’t opt for the 30 Minute Meal edition, as I was tempted to. I would still be in the kitchen now.

I can only conclude one of two things: either Jamie has superpowers or I am painfully slow. But then, Jamie probably has an army of washer-uppers and cleaners following his every step, while my kitchen looked as if a troupe of clowns had thrown a food fight, emptied all the cupboards and upended most drawers by the time I had stopped the clock.

Having dabbled in gastronomy with questionable results I think it best for me to go back to basics. You can’t beat an egg, as a wise man once said, and since an avocado is a nutritionally complete meal in itself, why complicate life? Even my long suffering children assure me just how much they love beans on toast, with a helping of pre-cut carrot sticks on the side, of course. foo