Espanyol victorious at La Rosaleda and Malaga out of Champions positions 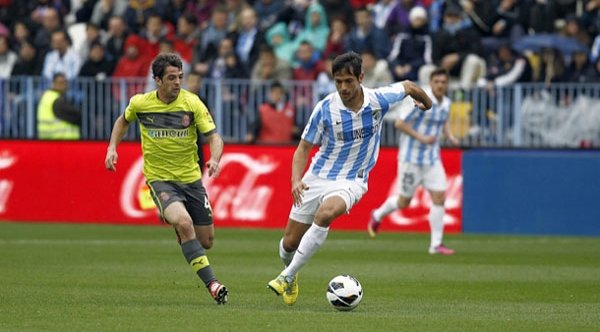 The second morning match this season at La Rosaleda kicked off with an early chance for the visitors in Caballero’s area, two minutes into play.  A rapid counter-attack by Wakaso resulted in a shot at goal for Verdú from in front of the penalty area, which Willy sent to a corner.  Stuani tried to open the scoring for Espanyol, with a pass from Sergio García two minutes later.

The ‘Malaguistas’ were quick to retaliate, and started to impose their style of play and maintain possession.  The Blue and Whites began to feel more comfortable on the pitch and created opportunities to score.  Lucas Piazon had the first shot at glory for the Martiricos outfit in minute 17 from in front of the goal, and later Santa Cruz was unable to find the goal with a promising header, following a deflection off Espanyol keeper Casilla.

Despite a few chances for Javier Aguirre’s men in the first half, they didn’t cause too much trouble for the Málaga keeper.  After 45 minutes the scoreboard was at 0-0, although Málaga did take the initiative and were the stronger side.

The second half got underway with a setback for the Blue and Whites.  Following a corner kick, Caballero appeared to have the ball under control, but a determined Colotto managed to score the first goal of the game.

Manuel Pellegrini’s men struggled to regain their composure following Espanyol’s goal, but were determined to equalise.  Following a pass from Antunes to Santa Cruz, a chance came for Seba from outside the penalty area, but he sent the ball over the crossbar.

The Blue and Whites coach made two substitutions to try and get a goal.  Joaquín and Duda joined the game in place of Piazon and Seba Fernández.  However this didn’t stop Espanyol’s second goal of the match.  A counter-attack by Wakaso on the left wing set up the perfect shot for Sergio García.  The visitors were now 0-2 up in the 65th minute.

The ‘Malaguistas’ didn’t cause any real danger for Espanyol, who maintained a strong defence for the 90 minutes.  Shots by Toulalan and Roque were the only real chances for the Blue and Whites at this stage of the game.

Málaga CF now has a break from the League, and following two away games against Rayo Vallecano and Real Sociedad, returns to La Rosaleda on 14th April, when they play host to Osasuna.  The next Champions League match takes place on 3rd April against Borussia Dortmund.