Semana Santa, a time of passion and devotion in Malaga 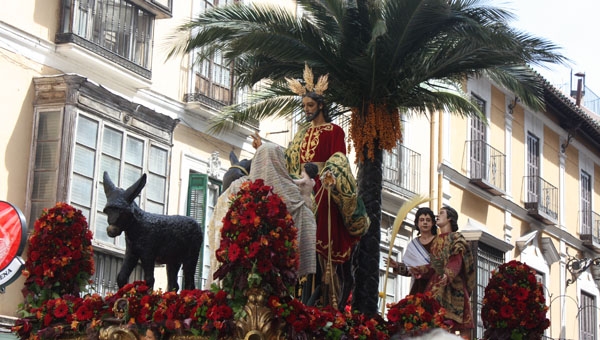 Often described as a week full of ‘passion and devotion,’ whatever one’s faith, given the chance, it should be experienced at least once in a lifetime.

Thousands of people, both locals and visitors, take to the streets at Easter to see or take part in the processions.

More than 25,000 seats are placed along the official route for people to watch the religious images go past.

One of the favourite areas for this is the ‘Tribuna de los Pobres’ (poor people’s stand) in Calle Carreteria, where the large steps are used as seating, for free, hence the name.

Although each cofradia (brotherhood) has its own route, there is one part of Malaga which is common to all of them and is the ‘official’ route of 807 metres, from the Alameda Principal, via Calle Larios to Calle Granada.

Readers planning to see the processions, are recommended to find standing space in this area, but be sure to get there early.

Many people find the encierro, when the images return to their churches, the most spectacular moment of the procession, or the moment when the figures of Christ and the Virgin meet, and despite their tiredness, the portadores (carriers) place them face to face and begin to sway to the sound of the national anthem.

Some of the figures enter Malaga Cathedral during the procession, which is also very spectacular.

As well as those carrying the ‘tronos’, some weighing up to five tonnes, there are marching bands, penitents dressed in pointed hoods which only show their eyes, local authorities and other members of the brotherhoods carrying the emblems.

The colours used depend on each brotherhood. There are also some penitents, mostly women, following the processions barefoot and dressed in black.

People feel true devotion to these religious images with many clapping or crying as they pass by. Often, people spontaneously burst into song (a ‘saeta’) as the image passes their balcony.

Huge crowds can be expected at all the processions, so spectators should travel light and watch belongings at all times.

Monday (March 25): Cautivo, should be in the Alameda Principal around 11.30pm, known as the ‘Señor de Malaga’. Columna (or Gitanos), returns to the temple near Plaza de la Merced at 10.30pm and is interesting for the singing. There are four more processions today.

Tuesday (March 26): Rocio, leaves from Plaza Victoria at 3.30pm, should pass Alameda Principal at 6.25pm, this figure of the Virgin has a cloak of fresh flowers. There are five more processions today.

Wednesday (March 27): Fusionadas, should pass Alameda Principal at 7.40pm, and carries four different images. El Rico, leaves from Calle Alcazabilla at 7pm and at 9.30pm, the figure of Christ pardons an inmate in Calle Cister. There are four more processions today.

Maundy Thursday (March 28): Mena, should pass the Alameda Principal at 8.35pm and is carried by members of the Spanish Foreign Legion. Also interesting is their arrival in Malaga earlier the same morning. One of the favourite images, La Esperanza, should pass the Alameda Principal at around 11.55pm ending the procession at 5am. The two meet at about midnight. There are five more processions today.

Good Friday (March 29): Servitas, should pass the Alameda Principal at about 2.05am. The lights are turned out and the image is marched to the sound of a single drum. There are seven more processions today.

Resurrection Sunday (March 31): The resurrection procession starts from Iglesia de San Julian at 10.15am, passing Alameda Principal at midday and ending at 2.30pm.

For a full list of all the processions, itineraries, timetables and brotherhoods, see http://agrupaciondecofradias.es/semana-santa/horarios-itinerarios.html

THE Fuengirola-Malaga C-1 Cercanias train line will run with additional services during Easter week. The train station Malaga-Alameda is the nearest to the old town where the processions take place. There will be late trains running back from Malaga along the coast on certain days.

For information on bus connections to the city centre visit: