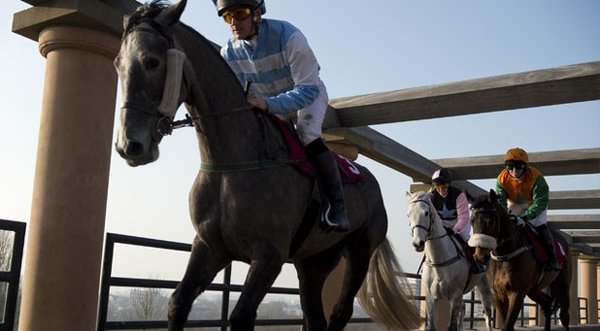 CHANNEL 4 has launched their ad campaign for their upcoming Grand National season.

The trailer for the network’s coverage, which was premiered earlier this week, sees a group of jockeys race through an urban landscape, jumping over obstacles including cars and picnic benches.

The clip was conceived by the team behind the channel’s Paralympics ‘Superhumans’ campaign, and was filmed on location at Liverpool’s EvertonPark. Channel 4’s Grand National season launches next month, and will feature themed versions of Come Dine With Me and Saturday Brunch, along with Alan Carr’s Grand National Specstacular.

There will also be three days of coverage of the meeting at Aintree from April 4 to April 6, with 15 hours of live action broadcast.

The John Smith’s Grand National takes place on April 6 at 5.15pm (CET), and will be shown live on Channel 4.
A Comic Relief sketch featuring Rowan Atkinson impersonating the Archbishop of Canterbury has attracted more than 2,000 complaints. Before the 9pm watershed on March 15, the Mr Bean star posed as a fictional version of the religious leader during a three-minute skit on BBC One.

He made a number of jokes, including comparing One Direction to Jesus’s disciples, saying prayer “doesn’t work” and advising viewers that Jesus said “love your neighbours”, but not “sh*g your neighbours.”

The corporation has removed the skit from catch up service iPlayer.  In total, the BBC got more than 3,000 complaints about the Comic Relief charity fundraising night of programming, which drew a peak audience of 12.2 million people, and raised more than £75 million (€88.27 million) for good causes.
Downton Abbey broke a record with its season three finale in the United States. The episode – which aired on Sunday, February 17 – beat all broadcast and cable competition to become the highest-rated show on American television that evening.

The Carnival Films show, which airs on Masterpiece on PBS in the country, reached an average of 12.3 million viewers, with the entire third series averaging 11.5 million viewers. It has become the highest-rating TV drama in PBS’s history, and has reached more than 24 million viewers overall.

If you would like me to answer any questions you may have on satellite TV or to expand on anything I have written about please call me on 678 332 815 or email [email protected] I look forward to your comments and questions.  Don’t forget to listen to my radio show every weekday from 10am on Spectrum Radio (90.8fm), or listen online at costaalmeria.spectrumfm.net for the latest news and views from the world of satellite television.