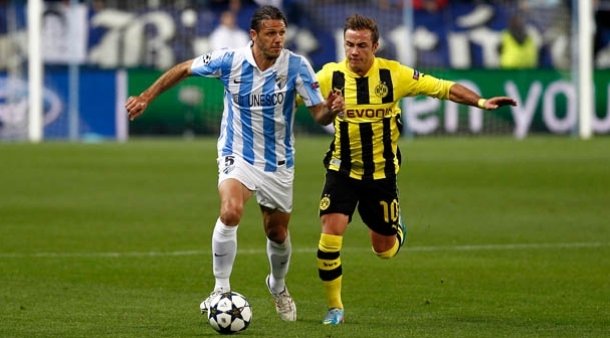 The quarter-final tie between Málaga CF and Borussia Dortmund will be decided in Germany in six days’ time. Despite both teams creating several goal opportunities, tonight’s 0-0 draw at La Rosaleda has left the second leg wide open, with only minor details deciding who will qualify to the semis. Manuel Pellegrini’s side had a great first half, but weren’t lucky enough to net a goal.

As predicted, the game got off to a vibrant start.  Both teams share a similar match philosophy and work well with the ball, and both were determined to dominate very early on.  The first shot at glory came for the Blue and Whites, with a powerful kick from Antunes, resulting in an impressive save by Weidenfeller.

However it was Saviola that came the closest to opening the scoring in the 6th minute, following a tackle on the goal line which led to a promising shot that went into the side netting.  Málaga CF showed they certainly weren’t taking any prisoners against the current ‘Bundesliga’ champions.

During the first few minutes, Manuel Pellegrini’s side kept Borussia Dortmund in check, and away from Willy Caballero’s goal.

Jürgen Klopp’s men soon retaliated, and in the 13th minute had their first chance to get on the leader board.  Although they had barely reached Caballero’s area, a header to Götze set up the perfect ball, however the Málaga keeper stopped last year’s ‘Golden Boy’ from getting a goal with just one hand.

Another chance arose for Borussia five minutes later, as Antunes lost possession in midfield.  Again it was Götze who tested Willy’s reflexes, but the Argentinean-born keeper wasn’t about to concede a goal.  Over the next few minutes, it was the visitors who dominated possession and caused trouble for the ‘Malaguistas’.

Borussia began to feel more comfortable on the pitch, against a much more patient Málaga than in the first few minutes of play.  Reus came close to netting a goal in minute 24, but proved little concern for Willy.

It was Málaga CF’s turn, and just three minutes later Isco took advantage of a defensive error to gain possession, passing the ball to Saviola who was mere inches away from glory.  Lewandowski responded with a close call for the visitors.

Thirty minutes into the game and Borussia Dortmund was awarded a free kick following a Weligton foul, who was shown a yellow card and banned from the second leg.  Reus took the shot, narrowly missing Willy’s goal sending the ball too far to the right of the target.

From here until half-time, the ‘Malaguistas’ took the reigns and dominated possession with impressive game play that should have resulted in a goal.  Joaquín, Baptista, Saviola and Isco painted a very blue and white picture on the game, up until the half-time whistle.

Pellegrini’s men had another two chances to open the scoring in minute 42.  A Joaquín corner set up a promising header for Weligton that was deflected off the keeper.  Toulalan tried again to net a goal, although Götze forced a corner kick.

Following a Málaga dominance during the last 15 minutes of the first half, a fierce shot at goal by Borussia’s Kehl was denied by Willy.

Half-time arrived with a goalless draw.  Pellegrini’s men had a few close calls in the first half, with some promising chances for Borussia Dortmund against the powerhouse that is Willy Caballero.  However, towards the last part of the first half, Málaga CF pulled out all the stops and thoroughly deserved to get a goal.

The ‘Malaguistas’ were determined to maintain the pace in the second half.  Borussia launched a lethal attack from the left wing, creating a chance for Lewandowski in front of the penalty area, but amazingly he missed the goal by a mile.

The rhythm of the match changed somewhat compared to the first 45 minutes, with both teams focusing on controlling the ball and tight possession, rather than deep passes.
Up until minute 64, Málaga could breathe easy, however when a long pass landed at Götze’s feet, he was again in front of Willy’s area to launch a mighty shot at goal that just brushed the post.

Only a minute later, ‘Golden Boy’ Isco gained possession to unleash a formidable shot at Weidenfeller’s goal.  Toulalan had another chance to score from the deflection, but to no avail.

With just a minute left in play at La Rosaleda, a Duda free kick on the right wing set up a low ball for Antunes, who fired a powerful shot that he sent just a little too high over the German goal.