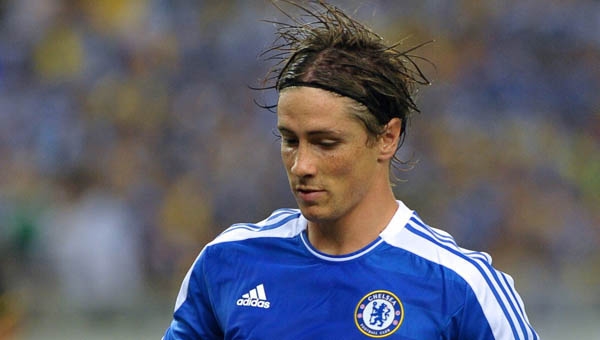 MAN OF THE MATCH: Fernando Torres

Goals from the much-maligned Spaniard and Nigeria forward Victor Moses gave the hosts a deserved 2-0 lead, but they stepped back leading into half time and paid the price when John Terry’s handball allowed Natcho to convert from the penalty spot.

The second half was a less frantic affair but Chelsea managed to put daylight between them and the Russians when Torres headed home his second of the night and 19th of the season after a fine cross from Juan Mata.

Rafael Benitez made six changes from the FA Cup win over Manchester United, with two enforced after Ashley Cole was injured and Demba Ba cup-tied.

Their refreshed XI started brightly as Yossi Benayoun impressed on the left, while a masked Torres looked more confident than usual as he led the line for the hosts. Rubin, meanwhile, surprisingly dropped striker Salomon Rondon to the bench, and it showed as replacement Vladimir Dyadyun toiled up front.

It was 1-0 after 16 minutes as Torres was rewarded for his energy and bravery after taking down a long ball by David Luiz – with goalkeeper and defender flying in, the Spain striker hurled himself at the second ball to bundle it home.

Rubin, who initially sat deep and looked for the counter attack, did respond as Natcho’s long-range drive stung the palms of Petr Cech.

But the hosts were knocking it about nicely and Ryan Bertrand was denied a wonder-goal by visiting skipper Roman Sharonov’s vital clearance after the reserve left-back beat three men and clipped the ball over goalkeeper Sergei Ryzhikov.

So the second goal was richly deserved, coming after Torres once more caused the Russians problems, his header palmed away by Ryzhikov and follow-up cross only half-cleared for Moses to rifle the ball into the top left.

As with the opener, Rubin did respond, although this time with greater effect as Chelsea found themselves on the back foot.

And four minutes before half-time they got their reward when Terry stuck an arm out as attacking left-back Cristian Ansaldi fired a curler after cutting inside past Branislav Ivanovic.

Terry was booked for the handball and Natcho made no mistake from the spot, sending Cech the wrong way as he claimed a vital away goal.

Ansaldi almost got a second just before the break when another long-range effort dipped just wide, and having dominated much of the half suddenly it was Chelsea who were happier to hear the whistle blow, but Rubin made the half-time change as Rondon replaced Dyadyun, who had picked up a knock.

The Blues started the second half stronger though, as Mata forced a smart stop from Ryzhikov while Cesar Azpilicueta saw a low finish blocked at a corner.

Chelsea were still having their moments at the back though, with Cech flapping not for the first time as Sharonov almost headed in from a corner.

Down the other end Terry, desperate to atone for his earlier error, went close with a similar effort but after the hour mark both sides seemed to run out of gas as the tempo slowed somewhat.

Benitez acted by introducing Eden Hazard, but the withdrawal of Moses seemed unusual, with Frank Lampard ineffectual until that point.

However, Lampard had a role in his team’s third, releasing Mata down the left, with the former Valencia man’s excellent cross met by a flying Torres, who buried a thumping header into the top right.

With the two-goal cushion restored, and Rubin clearly tiring, Chelsea could afford to sit back again as they held on to the ball for much of the latter stages.

Rubin were exhausted, with the closest the Russians coming to a goal threat a corner in the dying seconds that Chelsea cleared.

The away goal will have boosted Kurban Berdev’s side, but Chelsea’s two goal advantage makes them favourites to reach the semi-finals as they seek to be the first club to win Europe’s secondary club competition the season after the Champions League.

MAN OF THE MATCH

Fernando Torres (Chelsea: Took his goals bravely and was a constant threat against the Russian side. Led the line with power and – unusually – confidence.