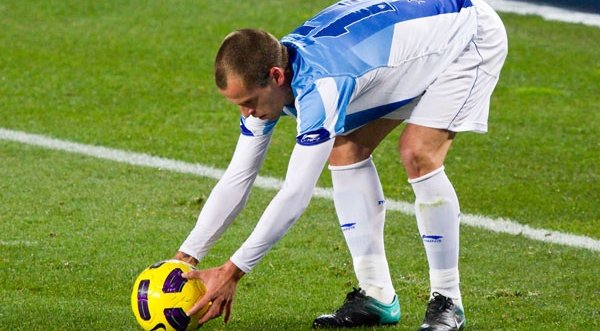 It was just the tonic Manuel Pellegrini’s men needed before the midweek Champions League quarter-final clash against Borussia Dortmund, with midfielder Pedro Morales scoring one goal and setting up the other two.

Morales, making his first start since a January move from Dinamo Zagreb, stamped his mark on the game in the 21st minute with a pinpoint free-kick that found centre-back Weligton unmarked at the far post. The Brazilian beat David Cobeno with a powerful header.

However, the lead lasted just 10 minutes when Piti fired home from the penalty spot following a theatrical tumble in the box from Tito. The Rayo striker was adjudged to have been upended by Malaga goalkeeper Willy Caballero, who was harshly booked for the challenge.

It was the signal for a series of nasty fouls from Rayo as the game became more physical, with Los Blanquiazules’ left-back Vitorino Antunes coming in for some particularly rough treatment courtesy of Chori Dominguez and Alex Galvez.

The hosts almost took the lead just before half-time when Jose Carlos narrowly failed with a header from Casado’s left-wing cross, but honours remained even at the break.

Immediately after the restart Caballero had to be at his best to save from Lass Bangoura after the Guinean had outstripped Antunes down the right.  Nonetheless, it was the Costa del Sol side that got their noses in front on 54 minutes.

Julio Baptista got between two defenders to head Morales’ corner wide of the ‘keeper for his first goal since returning from a 16-month injury lay-off in February.

The goal appeared to inspire Malaga, who subsequently created a series of chances on the break as Rayo left gaps at the back, and Baptista, substitute Roque Santa Cruz and Jesus Gamez should all have done better.

But it was left to Chilean international Morales to cap a fine individual performance by crashing a long-range shot past Cobeno four minutes from time to seal Malaga’s first La Liga win in five matches.